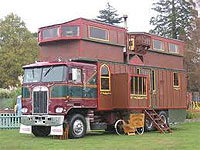 Whilst there aren't many Romany gypsies in New Zealand, there is a small number of Kiwis who have taken to life on the road, living in converted trucks and school buses rather than conventional housing. These Kiwi 'gypsies' are also known as housetruckers (and hippies) and generally speaking, are fully accepted by the wider (and probably slightly envious) populace.

One of the most well-known types of traditional home for these non-traditionalists is the ageing Bedford truck. Many of the old trucks and buses converted into gypsy homes are colourful and quite ingenious in their build. Legal height restrictions limit the size of their annexes and attics, but often the truck base is almostly completely hidden and disguised by the home built on it. Although seen on the road from time to time, many of these housetrucks are parked up for months at a time so tend to built with home comforts in mind rather than highway endurance. New Zealand is a reasonably good home for housetruckers moving around, however, as there are freedom camping sites all around the country and dump points for clearing tanks.

Some housetruckers make their living from small arts and crafts-based cottage industries or follow the fruit picking seasons throughout New Zealand. There are two main gypsy fairs held in the country, The Gypsy Travellers Fair and the Gypsy Fair Original. These fairs are free to attend and are run as co-operatives by road folk. You can check out this lovely hippie lifestyle for yourself, meet some housetruckers, check out some fabulous housetruck homes and enjoy: