The arts in New Zealand reflect an exciting blend of cultural influences including Māori and Pacific Island, as well as European and Asian. From haka to hip-hop, fashion to filmmaking, New Zealand artists are making their mark at home and around the world. 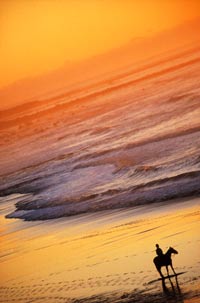 Whether you're interested in Māori carving or abstract painting, you'll find lots of art in New Zealand. Traditional Māori arts such as carving and weaving are alive and well. You'll find excellent examples in museums, shops, and on marae (meeting grounds) throughout the country.

New Zealand has a fine tradition of painting. C.F. Goldie (1870 - 1947) and Gottfried Lindauer (1839 - 1926) were two early artists who painted portraits of Māori subjects. Frances Hodgkins (1869 - 1947) is one of New Zealand's most acclaimed and influential painters. She was associated with a number of avant-garde British movements including Neo Romanticism.

New Zealand has a vibrant contemporary art scene and most New Zealand towns have interesting art galleries and shops. Māori and Pacific, as well as feminist influences, are strong in contemporary New Zealand art. Artists such as Ralph Hotere, John Pule, Michael Parekowhai and Robyn Kahukiwa, not only create striking and dramatic images, but also provoke reactions from their audience.

Katherine Mansfield (1888 - 1923) is the giant of early New Zealand literature. Regarded as being one of the finest short-story writers in English, she is the first in a long line of excellent New Zealand short-story writers. Stories such as 'The Doll's House', 'At the Bay', and 'The Garden Party' are superb examples of Mansfield's depiction of turn-of-the-century colonial New Zealand.

Born in 1924, Janet Frame is one of New Zealand's most highly regarded novelists. Frame's books include devastating accounts of the treatment of mental patients in New Zealand during the 1950's and 60's. Her best-selling three-part autobiography was made into a top-rating television series and film--'An Angel at my Table'.

An exciting younger generation of New Zealand novelists including new-ager Elizabeth Knox ('The Vintner's Luck'), Gen X-er Emily Perkins ('Not Her Real Name'), Bulgarian-born Kapka Kassabova ('Reconnaissance'), and Samoan-born Sia Figiel ('Where we once belonged') show that contemporary New Zealand literature has a wide range of cultural and stylistic influences.

It should come as no surprise that much of New Zealand's best poetry is about the country's landscape. However, major New Zealand poets including James K. Baxter, ARD Fairburn, Denis Glover, Allen Curnow, and Sam Hunt also reveal a keen social conscience and wry sense of humour.

New Zealand fashion has come of age in the last few years. Exciting designers such as Karen Walker, World, and Zambesi have put the country on the fashion map, frequently exhibiting in London and Sydney. New Zealand fashion used to be largely a copy of European styles. Now it is a vibrant and dynamic industry with a range of influences, including those of Māori and the Pacific Islands.

New Zealand has three professional symphony orchestras, including the highly acclaimed NZSO (New Zealand Symphony Orchestra). There are also a large number of excellent choirs, including the National Youth Choir, which recently won a number of prestigious internationalevents.

Recent co-productions between European-style groups, such as the Royal New Zealand Ballet and the NZSO, and Māori music and dance groups, are examples of a bicultural 'fusion' currently occurring.

As well as supporting a thriving local theatre scene, New Zealand performers regularly appear at festivals abroad, including the Edinburgh and Adelaide Festivals. Māori and Pacific Island writers and performers have had a big impact on the New Zealand theatre, giving it a unique and colourful Polynesian-influenced identity.

A competitive exchange rate, excellent scenery, and a highly skilled workforce make New Zealand the perfect place to shoot a movie. New Zealand has produced many top directors, including Roger Donaldson ('Cocktail', 'Species'), Jane Campion ('The Piano'), Lee Tamahori ('Once Were Warriors', 'The Edge'), and Peter Jackson, who filmed his massive 'Lord of the Rings' trilogy in New Zealand.

Movies such as 'Smash Palace', 'Once Were Warriors', 'The Piano', 'Heavenly Creatures' and 'Lord of the Rings' trilogy have proved that New Zealand can produce unique and intelligent movies equal to the best in the world.