Though a Dutchman was the first European to sight the country, it was the British who colonised New Zealand. With growing numbers of British migrants, and a dwindling and largely landless Māori population, British culture dominated New Zealand life throughout the 19th and first half of the 20th centuries.

However, since World War II, New Zealand has moved towards its own unique national identity and place in the world.

The first European to sight New Zealand was Dutch explorer Abel Tasman. He was on an expedition to discover a great Southern continent 'Great South Land' that was believed to be rich in minerals. In 1642, while searching for this continent, Tasman sighted a 'large high-lying land' off the West Coast of the South Island. 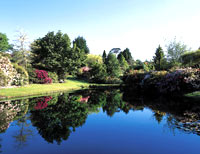 First to discover New Zealand in 1642, Abel Tasman annexed the country for Holland under the name of 'Staten Landt' (later changed to 'New Zealand' by Dutch mapmakers).

Sailing up the country's West Coast, Tasman's first contact with Māori was at the top of the South Island in what is now called Golden Bay. Two waka (canoes) full of Māori men sighted Tasman's boat. Tasman sent out his men in a small boat, but various misunderstandings saw it rammed by one of the waka. In the resulting skirmish, four of Tasman's men were killed.

Tasman never set foot on New Zealand, and after sailing up the West Coast, went on to some Pacific Islands, and then back to Batavia (now Jakarta) in the Dutch East Indies (now Indonesia). His mission to New Zealand was considered unsuccessful by his employers, the Dutch East India Company, Tasman having found 'no treasures or matters of great profit'.

Captain James Cook, sent to Tahiti to observe the transit of Venus, was also tasked with the search for the great southern continent thought to exist in the southern seas. Cook's cabin boy, Young Nick, sighted a piece of land (now called Young Nick's Head) near Gisborne in 1769.

Cook successfully circumnavigated and mapped the country. His botanists and other experts on board his ship, the Endeavour, gained considerable information about the country's flora and fauna, and the native Māori inhabitants. A mural in Whakatane depicts the coming together of Māori and Pakeha (Europeans). Cook led two more expeditions to New Zealand, before being killed on a Hawaiian beach in 1779. 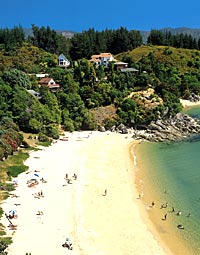 Prior to 1840, it was mainly whalers, sealers, and missionaries who came to New Zealand. These settlers had considerable contact with Māori, especially in coastal areas. Māori and Pakeha (Europeans) traded extensively, and some Europeans lived among Māori.

Before 1840, there were about 2000 Pakeha (Europeans) in New Zealand, most living in the Bay of Islands. At this time, intertribal Māori warfare was frequent, and the arrival of guns, which Māori traded from Pakeha, made it deadly. This, and the diseases brought by the Pakeha, had a terrible effect on the Māori population, and their numbers started to steeply decline.

With the signing of the Treaty of Waitangi in 1840, New Zealand became a British colony. This saw a great increase in the number of British migrants coming to New Zealand. Many had their passage paid for by colonial companies.

Many New Zealand cities and towns were established and populated in this way. These settlements were intended to be civilised and self-sufficient, with small farmers cultivating their land, and living in peace with the native people.

As more migrants arrived and more land was needed for them, land disputes with Māori increased. The ambiguity and lack of adherence to the Treaty of Waitangi saw grievances increase and skirmishes multiply. These turned into full-scale war in Northland during the mid 1840's, and in the rest of the country during the 1860's.

British troops helped the New Zealand colonial forces during these conflicts, as did some Māori.

During the land wars Māori were victorious on many occasions. Incidents such as the defence of the Ohaewai Pa in Northland showed that Māori military engineering was sophisticated and often superior to Pakeha. However, the force and greater number of the colonial forces eventually saw the New Zealand Wars end in defeat for the Māori tribes.

Soon afterwards, the government seized vast tracts of Māori land including prime farmland in Waikato and Taranaki. The major loss of land, combined with continued deaths from disease, saw the Māori population steeply decline, dropping to only about 40,000 by 1900.

Throughout the 19th and much of the 20th century, the 'homeland' of Britain had an enormous influence on New Zealand. Government administration, education, and culture were largely built on British models. New Zealand troops fought, and suffered severe casualties in the Boer War and the two World Wars.

As Prime Minister Michael Savage said about England in 1939, 'where she goes, we go, where she stands, we stand'.

While New Zealand is still heavily influenced by its colonial heritage, the country now has its own strong sense of identity. While still a member of the British Commonwealth, and maintaining close, friendly relations with the USA, New Zealand now has a far more independent trading and foreign policy.

Since the mid 1980's, New Zealand has been a nuclear free zone, with its armed forces primarily focused on peacekeeping in the Pacific region. Today, even conservative politicians talk openly about New Zealand eventually becoming a republic--something unheard of until quite recently.