First Māori were the early inhabitants of Aotearoa/New Zealand (meaning 'Land of the Long White Cloud'). After arriving from their ancestral Polynesian homeland of Hawaiki, probably about 1,000 years ago, they set up a thriving society based on the iwi (tribe), which flourished for hundreds of years.

According to Māori, the first Māori explorer to reach New Zealand was Kupe. Using the stars and ocean currents as his navigational guides, he ventured across the Pacific on his waka hourua (voyaging canoe) from his ancestral Polynesian homeland of Hawaiki. It is thought that Kupe made landfall at the Hokianga Harbour in Northland, around 1000 years ago.

You will not find Hawaiki on a map, but it is believed Māori came from an island or group of islands in Polynesia in the South Pacific Ocean. It is not known exactly which place, but there are distinct similarities between the Māori language and culture, and others of Polynesia including the Cook Islands, Hawaii, and Tahiti.

It is now thought that Polynesian migration was planned and deliberate, with many waka hourua making return journeys to Hawaiki. Modern replicas of waka hourua, such as Te Aurere, have successfully journeyed throughout the Pacific, using traditional navigation methods.

The Auckland War Memorial Museum has one of the best collections of Māori carvings in New Zealand.

More waka hourua followed Kupe over the next few hundred years, landing at various parts of New Zealand. Today, many iwi (tribes) can trace their entire origins and whakapapa (genealogy) back to certain waka hourua.

Māori were expert hunters and fishermen. As mostly coastal dwellers, fishing was vitally important to them. It also played a part in their mythology—the god, Maui, was believed to have 'fished up' the North Island.

Māori wove fishing nets from harakeke (flax), and carved fishhooks from bone and stone. Māori considered whales as kaitiaki (guardians), and used their flesh for food and their hard, strong bones for weapons. A Māori tradition that remains today is to throw back the first fish caught. This is a way of thanking Tangaroa, god of the sea, for his bounty.

Māori hunted native birds, including Moa, the world's largest bird, with a range of ingenious traps and snares. Many different species of bird, including Kereru and Tui, were eaten. However, the now-extinct Huia was considered tapu (sacred) and was never eaten; though its feathers were highly prized, and worn in the heads of rangatira (chiefs).

Penguins and seals were hunted and used as food by Māori, especially in the South Island. Muttonbirds were popular in the far south of the country, and are still a prized food today. They were stored in large bags of bull kelp, and could be preserved for many months.

Māori ate native vegetables and also introduced vegetables from Polynesia, including the kumara (sweet potato). Vegetables were planted and harvested with a variety of tools including diggers, spades, and clubs. Māori also ate the roots of ferns, which they pulverised with wooden pounders.

Other food included various berries and puha (a spinach-like vegetable). Māori also chewed gu—resin from the giant kauri tree. Weaved flax basket and bags were used to carry food, which was often stored in a pataka—a storehouse raised on stilts.

Māori had an ingenious way of cooking food that is still popular today, and a must for any visitor to try!

The hangi, or umu, is an earth oven built in a large pit. Special stones are placed over a fire of wooden sticks. A layer of green flax is laid above the stones, and then layers of meat and vegetables are placed between more layers of flax. A mat covers the oven. Water is then placed on the hot stones, which steams the food.

Slow cooking makes the food extremely tender, while the wood and the flax infuse the food with a beautiful delicate and smoky flavour.

In pre-European times, skirmishes between Māori tribes would often occur. To protect themselves from being attacked by other iwi, Māori would construct a Pa (fortified village). These Pa were often built in strategic locations, such as at the top of hills and on ridges. Most Pa were cleverly constructed, with a series of stockades and trenches protecting the inhabitants from intruders.

Today, many historic Pa sites can be found throughout the country.

Ruapekapeka Pa, pictured right, was the site of the final battle in the 'War of the North', which waged between Māori and British during the 1840's.

Both before and after the arrival of European, Māori have proved to be excellent warriors. Only men fought, and one of the most highly prized weapons was the spear-like taiaha. This weapon, often beautifully carved, is still used in Māori ceremonies today, and its use has become a highly sophisticated art form.

Another fearsome weapon was the mere (club), beautifully carved, with some made out of pounamu (greenstone or jade). A warrior with a full moko (tattoo) on his face, brandishing a taiaha or mere, makes a fearsome sight.

One of the 180 different varieties of fern—a New Zealand national symbol. 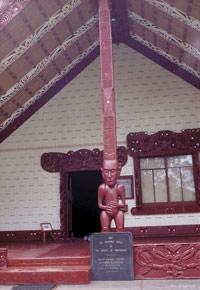 The marae (meeting grounds) was a focal point of Māori communities, and still fulfils a crucial role in Māori society today. Wharenui (meeting houses—literally 'big house') were large structures at the centre of the marae.

A wharenui resembles a human body in structure. The front part, called the koruru, represents the head. The maihi are large boards that reach from the 'head' down to the ground, and represent arms. The amo are short boards at the front of the wharenui representing legs, while the tahuhu, a large beam running down the length of the roof, represents the spine.

Many wharenui contain intricate carvings and panels that refer to the whakapapa (genealogy) of the tribe, and to Māori creation stories.

While Māori lived throughout the North and South Islands, the Moriori, another Polynesian tribe, lived on the Chatham Islands, nearly 900 kilometres east of Christchurch. Moriori are believed to have migrated to the Chathams from the South Island of New Zealand.

In the late 18th century, there were about 2,000 Moriori living on the Chathams. However, disease and attacks from Māori saw the numbers of this peace-loving tribe become severely depleted. The last full-blooded Moriori is believed to have died in 1933.