The kiwi is a curious little bird – it cannot fly, it is the size of a small chicken, it is nocturnal, it is the only bird known to have nostrils and it has the largest egg to body weight ratio of any bird. The kiwi is native to New Zealand and much loved and treasured by many New Zealanders. It is also the country's national emblem and New Zealanders are known as 'kiwis'. 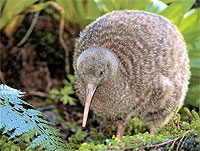 However, the number of kiwis (birds, not people!) in New Zealand is dropping rapidly due to predators such as stoats, cats, ferrets and dogs. Surveys conducted in the 1990s indicated that there are now less than 50,000 kiwis in New Zealand. Unless conservation programmes continue to protect these little birds, the existing kiwi species look set to join their now-extinct relative, the moa.

There are four main species of kiwi in New Zealand: the brown kiwi, spotted kiwi, rowi and tokoeka. Whilst some kiwi still live on the (main) North and South Islands, increasing numbers of kiwi are transferred to protected colonies. The Department of Conservation actively protects and monitors the kiwi population in these colonies and throughout the country and encourages volunteers to join its conservation efforts. View more information on getting involved with kiwi conservation.

Send a Kiwi related E-Postcard to your friends. You can also browse through this list of operators that invite you to view Kiwi in New Zealand. 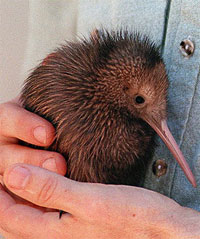 The Paparoa Wildlife Trust is one body of conservationists who aim to protect the kiwi and focus on the plight of the great spotted kiwi in the southern Paparoa mountain ranges on the West Coast of the South Island. Their Operation Nest Egg programme was established to increase kiwi numbers by taking eggs for hatching and rearing in controlled environments before birds are released back into the wild.

One member of the Paparoa Wildlife Trust, Trevor Olson, is particularly passionate about kiwis even selling the 7th and 8th holes of his golf course to establish a kiwi creche. This creche features a predator proof fence and visitors to the lodge on his property can hear the kiwis calling and feeding at night.

To find out more about kiwis and kiwi conservation, visit the following websites:

Send a Kiwi related E-Postcard to your friends.