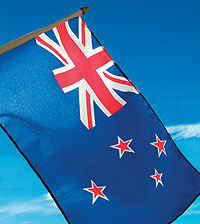 The official New Zealand flag was first used in 1869. It is based on the British blue ensign with the Union Flag (also known as the Union Jack) in the upper left corner, and four red stars with white borders to the right. These stars represent the constellation of Crux, the Southern Cross, as it seen from New Zealand.

Initially used only on government ships, it wasn't until 1902 that it was made the official flag of New Zealand.

The need for an official New Zealand flag was first recognised when a New Zealand trading vessel was seized by customs officials in Sydney harbour. The ship had been sailing without a flag, which was a violation of British navigation laws. However New Zealand-built ships could not fly under a British flag as New Zealand was not yet a British colony.

This incensed Māori, as two important chiefs were on the ship that was seized, and the call for an official New Zealand flag gained impetus.

Flag of the United Tribes of New Zealand

To Māori, the United Tribes flag signified that Britain had recognised New Zealand as an independent nation with its own flag, and had acknowledged the mana of the Māori chief.

The flag is still flown at Waitangi, site of the signing of New Zealand's founding document, The Treaty of Waitangi.

Following the signing of the Treaty on 6 February 1840, which effectively made New Zealand a British colony, the Union Jack replaced the Flag of the United Tribes of New Zealand as the official flag.

However some Māori believed that they should have the right to fly the United Tribes flag alongside the Union Jack, and viewed the Union Jack as a symbol of British power over Māori.

The Union Jack remained New Zealand's flag until the passing of the New Zealand Ensign Act instituted the current flag in 1902, yet was still used regularly in New Zealand well into the 1950s. 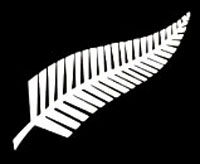 The silver fern flag is often seen at sporting fixtures involving New Zealand teams or individuals. There are many variations, but it is typically the image of a silver fern on a black background. Although it has no formal recognition, many regard it as the unofficial flag of New Zealand.

A symbol of national pride, the silver fern emblem is also incorporated into the logos of many New Zealand sporting teams, including the All Blacks rugby team.

For several years, some people in New Zealand have been calling for a change to the official New Zealand flag that signifies New Zealand's independence from Britain.

Several variations of the silver fern flag have appeared in support of this call for a new national flag.

Choose from over 500 New Zealand tours

Choose from over 500 New Zealand tours