Akaroa and the Banks Peninsula were formed many years ago by the violent eruptions of three ancient volcanoes.

A one-and-a-half-hour drive south-east of Christchurch, Banks Peninsula is the result of violent eruptions from three ancient volcanoes. The spectacular coastline of Akaroa Harbour and the surroundings bays are the legacy of the earth's fury.

The Ngai Tahu Māori tribe had already discovered the charm of the location well before Captain Cook sighted Akaroa Harbour in the 1770s. Akaroa is the site of the only attempted settlement by the French in New Zealand.

Their influence is still evident in this vibrant tourist town—look for French street names, quaint historic buildings and inspired cuisine. 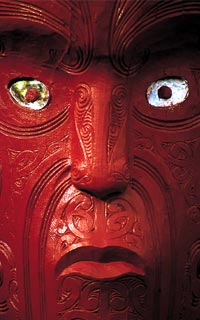 Around 1825 - 1828 there was civil war among the Ngai Tahu peoples. The villages at Ripapa Island, Tai Tapu and Birdlings Flat were destroyed. The fighting reduced the Māori population in Canterbury to about 2,500.

In 1831 Barque "Vittoria" visited Lyttelton Harbour and Akaroa. Muskets and gunpowder were traded for flax.

Newly armed with muskets, the Ngati Toa led by Te Rauparaha captured Kaiapohia Pa. Of the 1,000 Ngai Tahu inhabitants of the village, only 200 escaped the massacre.

The Ngati Toa then attacked Te Rauparah on the Akaroa Harbour, massacring all inhabitants.

These massacres reduced the Māori population in Canterbury to only about 500 people.

In 1838 Captain Jean Francois L'Anglois made a provisional purchase of land in "the greater Banks Peninsula" from the Māori. By the time the French settlers arrived in 1840, they discovered that the British had already claimed the land.

The French still established a settlement and the French influence is still visible today.

After being informed of the French intent to colonise Akaroa and use the area as a whaling port, the English ship the "Britomart" was despatched in to proclaim sovereignty of the Banks Peninsula for the Crown. The "Britomart" arrived in Akaroa on approximately the 16th of August and the British flag was raised showing British occupancy.

Akaroa is a popular tourist destination and offers a wide range of accommodation options:

To help plan your Akaroa holiday choose from the main categories below:

Regional Information
Key information and facts about the Akaroa region.

Activity Highlights
Major activities and attractions in the Akaroa region.

History
History of the Akaroa region.

Choose from our accommodation, attractions, tours, transport or visitor information categories below to find a tourism operator in Christchurch.