Memorable for its historical architecture, Dunedin is one of the best preserved Victorian and Edwardian cities in the Southern Hemisphere. 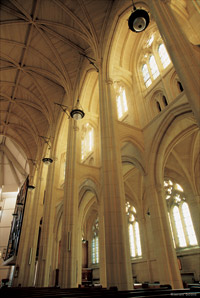 Dunedin's known history dates back as far as 1100 AD with the arrival of the Māori to the area. Some 600 hundred years later Captain Cook stepped ashore the Otago Harbour. He alerted of the presence of the numerous seals in the area bringing sealers to the region. The port later became an international whalers port.

The Scottish settlement and gold rush of the 1800's brought with it the stunning Edwardian and Victorian architecture that Dunedin is famous for.

Today Dunedin is New Zealand's oldest university city, and is known as the centre of learning in New Zealand.

Modern archaeology suggests that Dunedin was inhabited first by the Māori at around 1100 AD with the majority of the population concentrated along the south east coast.

The Māori hunted the moa—large native birds—in the region to near extinction. As moa numbers declined, so did the resident Māori population in the region. However numbers swelled again with the advent of fortified villages (pa) in around 1650. Taiaroa Head was one of the earliest pa built at Pukekura.

Captain James Cook first stepped ashore in Dunedin in early 1770, and named Cape Saunders on the Otago Peninsula and Saddle Hill. His reports of the numerous penguins and seals in the area bought sealers in the late 19th century.

A feud was started in 1810 between sealers and the Māori and it continued until 1823. Once peace was restored Otago Harbour became an international whaling port.

In 1848 The Lay Association of the Free Church of Scotland founded Dunedin as the principal town of its Scottish settlement. The name of 'Dunedin' originates from the Scottish Gaelic name for Edinburgh—Dùn Èideann.

Charles Kettle, Dunedin's surveyor, instructed to copy the characteristics of Edinburgh, the Scottish capital city, in the construction of Dunedin. The result has been described as 'both grand and quirky' as builders attempted to reconstruct Charles' vision across Dunedin's challenging landscape.

In 1861 gold was discovered at Gabriel's Gully bringing a rapid influx of population to the region. This rapid growth saw Dunedin become New Zealand's first city in 1865.

After ten years of gold rushes the economy slowed but Dunedin was left with a legacy of ornate Victorian and Edwardian buildings, regarded as the best collection in the Southern Hemisphere. The Flemish Renaissance-styled railway station is one outstanding example.

The University of Otago

Founded in 1869, New Zealand's oldest and largest university gives Dunedin its reputation as a centre of learning.

The energy and creativity of the vibrant student culture adds fun to daily life in Dunedin.

To help plan your Dunedin holiday choose from the main categories below:

Regional Information
Key information and facts about the Dunedin region.

Activity Highlights
Major activities and attractions in the Dunedin region.

History
History of the Dunedin region.

Choose from our accommodation, attractions, tours, transport or visitor information categories below to find a tourism operator in Dunedin.