Stewart Island has been populated since the 13th century. However the local settlements were small and made almost no impact on the land.

Stewart Island was originally inhabited by the Māori people around about the 13th century when the giant Moa roamed the mainland. The Māori named the Island 'Te Punga o te Waka a Maui' ('the anchor of Maui's canoe') or 'Rakiura' ('Glowing Skies'). Settlements were small, and only semi-permanent, as most people visited only seasonally.

The Māori came to Stewart Island for the titi—the chick of the sooty shearwater. These birds, more commonly known as mutton birds, are still gathered for food by the descendants of those earliest Polynesian settlers.

In the early 1800s the first European settlers began to arrive, attracted by the plentiful seal and whale populations. Most Europeans did not stay for long, but some settled close to the shore, often taking Māori women for wife. Traders and the first pastor soon followed. 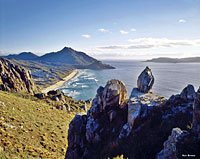 The 1860s gold rush rapidly grew the mainland towns of Dunedin and Invercargill, and drew a need for timber. Sawmillers moved to inland Stewart Island, felling many of the mighty rimu trees in the beautiful forests of the island.

In the 1890s there was a short lived tin mining boom at Port Pegasus, to the south of Stewart Island. Even these often very exploitative industries left comparatively few scars on the landscape, and these scars have healed rapidly.

Fishing was another good source of income on Stewart Island. Cod, groper, oysters and crayfish made their way to mainland markets. Today rock lobster and abalone provide a living for the local fisherfolk on the island. Also locally farmed salmon and mussels are sold in many of the world markets.

On-shore farming was always limited on Stewart Island. Unlike most parts of New Zealand forests were not clear-felled and burned after the largest trees were removed for timber. Also large areas of Stewart Island were set aside as nature reserves as early as 1900.

Today the forests are protected as Rakiura National Park.

To help plan your Stewart Island holiday choose from the main categories below:

Choose from our accommodation, attractions, tours, transport or visitor information categories below to find a tourism operator on Stewart Island.