Caving and Canyoning in New Zealand

New Zealand's range of natural underground formations and caves have fascinating glowworm displays and are perfect for caving and canyoning. 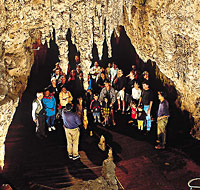 Caving in New Zealand is an experience you won't forget. New Zealand caves are limestone caves, or its metamorphic variety marble, but there are some lava caves, mainly around Auckland.

Virtually every part of New Zealand has caves, but the best known caving areas are Waitomo, north-west Nelson, and North Westland. Spelunkers (or cavers) claim New Zealand has some of the most challenging caving systems in the world, and each summer they are attracted to our best areas from around the world.

In the North Island the best known area is near Waitomo in the central region. Waitomo; wai meaning water, tomo meaninga hole in the ground. The famous Waitomo Caves offer an easily accessible cave attraction for visitors who want to look at limestone formations and glowworms. It also has a network of more difficult caves for more experienced and confident cavers.

In north-west Nelson, alpine caves are found at Takaka Hill, Mount Arthur, and Mount Owen, up to 1700 metres above sea level - some of the world's largest and deepest caving systems. These three marble mountains contain all of New Zealand's deepest caves, as well as the three longest - the Bulmer, Ellis Basin System (28 kilometers/17.39 miles), and Nettlebed, both at Mount Arthur. Karamea in Westland features the 13 kilometers (8.07 miles) Honeycomb Hill Cave, with 70 entrances, plus New Zealand's largest limestone arches.

The deepest cave surveyed in New Zealand is Nettlebed Cave at Mount Arthur, north-west Nelson. It is 889 meters (2,916 feet) and also the third longest at 24,252 metres (15 miles). The longest cave in New Zealand is the Bulmer Cavern in Mount Owen, south-west Nelson, which is 39.9 kilometres (24.8 miles), 400 metres of which are unsurveyed.

From beautiful limestone formations to deep caving systems, caving in New Zealand has underground adventures for all interests.

Unless you're an experienced climber or caver, these sports should only be tackled with the help of experienced and reputable operators. Getting lost deep underground of these New Zealand caves or dangling from a cliff top with shonky equipment is no way to spend your holiday in New Zealand. While experience is not always necessary, some water confidence and a wild sense of adventure is essential.

Ride nature's giant hydro slides! Canyoning in New Zealand is like being at a water park in New Zealand native bush. Take on the challenge of this unique water and rock adventure and you will find yourself plunging down water-polished chutes and abseiling waterfalls. Prepare to get very, very wet as you climb, swim, slide and float through the spectacular and mysterious green worlds of sculptured rock and sparkling, crashing cascades.

Canyoning is available in Auckland, Wanaka and Canterbury.

Most New Zealand caves are formed from limestone and marble sediment. Enormous amounts of calcium rich mollusc shells and skeletons of marine life form a thick strata, which over millions of years, compresses and solidifies. Over time, this sediment cements together to become rock beds.

As rainwater leaches through the soil, a mild solution of carbonic acid is released through cracks in the limestone, enlarging them. The drips also create other cave formations like stalactites. Over time, some passages erode to a large enough extent to become underground streams or rivers.

As a result, a hidden world is created, a world of caves, sinkholes and complex shafts. Waitomo's large limestone deposits have resulted in extensive honeycomb cave networks.