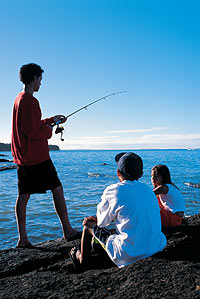 New Zealand, an anglers paradise, was put on the big-game fishing map after a visit by legendary American writer Zane Grey in the 1920's. New Zealand saltwater fishing catches vary by location, from tuna and shark around Fiordland, to snapper and kingfish in the Marlborough Sounds.

The far north, around the Bay of Islands has great New Zealand saltwater fishing, ranging from marlin, kingfish and sporting kahawai, with terakihi available around most of the New Zealand coastline. Kahawai, an express speedster and leaper, when hooked will take with abandon a fly cast from a boat or river mouth. Other fish species such as skipjack, tuna and trevally can give spectacular sport too.

In the 1980's the New Zealand Government moved to ban commercial long lining and to institute a moratorium on commercial marlin fishing. With the enlightened approach and controls, game fishing surged back and, in 1995, the Bay of Islands recorded its best ever season in 70 years.

Here is the best time to try and catch them:

Broadbill - a rare but prized catch, widespread in midwater and usually offshore, best fishing from November to March.

Hammerhead shark - regularly enters New Zealand's northern waters in summer. Other sharks such as bronze whalers and tiger can also be caught.

Mako shark - ranges from north to the bottom of the South Island but most abundant in the North Island, particularly the far north. With a streamlined body, it is a powerful fighter and spectacular leaper, best sea fishing in New Zealand in summer.

Striped marlin - New Zealand has reputedly the largest marlin in the world and many world records to prove it. Best fishing off the East Coast north of East Cape from December to June.

Thresher shark - a prized game fish most common from East Cape northwards but can range as far south as Cook Strait.

Yellowfin tuna - powerful fighter mainly on the East Coast north of East Cape. Whakatane is a noted yellowfin tuna base, best fishing from December to April.

Yellowtail - known in New Zealand as kingfish, ranges from North Island to northern South Island and sometimes further south. A powerful fighter reaching top weight of over 50 kilograms (120 pounds). Can be taken by land-based game fishing. Fishing all year round in the north, but mainly November to May in the Marlborough Sounds.

In established sport fishing bases, such as the Bay of Islands, Mayor Island, Whakatane, Tutukaka, near Whangarei and Tauranga, charters are readily available, supplying equipment, tackle, bait and refreshments.

Both day and overnight trips can be arranged, charters range from NZ$700 to $1000 a day. Charter trips have also been introduced out of Milford Sound in Fiordland, the Marlborough Sounds (Havelock) and Kaikoura regions of the South Island. North Island charters are also available from Napier, Gisborne and New Plymouth.