Off the Beaten Track to... Nelson Creek 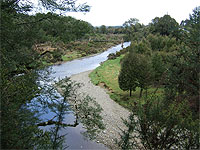 Once you've reached Greymouth on the West Coast of the South Island, you can follow in the footsteps of nineteenth-century fortune seekers fossicking for gold by following the State Highway 7 north. After 25 kilometres to Nghaere, it's simply a right turn to the Nelson Creek Settlement.

Nelson Creek has had a varied goldmining history from its beginnings in 1865, although at the height of the rush over 1,200 miners were scattered throughout the aptly-named Try Again Terrace (downstream from Nelson Creek). The Nelson Creek area is formed by sandstone layers overlaid by glacial gravels with the gold concentrated in hollows on the sandstone's surface. Ground sluicing was used to wash the gravels out of the working gold face.

You are invited to bring a goldpan and have a go at fossicking in the recreational gold fossicking area at Nelson Creek. However, you should fossick with care and respect for the environment and following the sign-posted guidelines. Hand tools only are allowed.

This area is rich in history (if not in gold) and you will also see the Nelson Creek suspension bridge originally built in 1872. There are also plenty of short walks including the Colls Dam Walk which is suitable for wheelchair access. Pack a picnic, a tent or both and enjoy!

Other Things To Do

Goldfields Cavalcade - Central Otago (26th February - 5th March 2011)
Join the annual pilgrimage which retraces the footsteps of early New Zealand gold-miners through Central Otago's dramatic, tussock-covered hills on foot, horse and wagon. The 2011 Cavalcade journey will end in Oamaru with a carnival and hoedown. Find out more at http://cavalcade.co.nz/.

To help plan your holiday activities in the West Coast area of the South Island, simply choose from the main categories below: