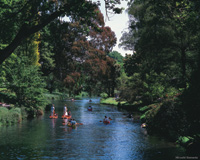 DAY 1 - Arrive Christchurch
Welcome to Christchurch—the "Garden City". You are met on arrival and transferred to your accommodation.
Stay: Christchurch (1 night)

DAY 2 - Christchurch – Dunedin
Cross the fertile Canterbury Plains by sightseeing coach to the seaside settlement of Timaru. Before reaching Oamaru, pass the 45th Parallel, halfway between the Equator and the South Pole. Continue through Palmerston - former gateway to the goldfields, before reaching Dunedin City at the head of the Otago Harbour. It is often called the 'Edinburgh of the South' and during the gold rush era of the late 19th century, was the main banking centre for this very wealthy province.
Stay: Dunedin (2 nights)

DAY 3 - Dunedin
This afternoon you will join a tour that will highlight the nature wonders of this region. Travel along the Otago Peninsula to the rugged Taiaroa Head. The headland is the only accessible mainland nesting site for the Royal Albatross. With a wing span up to 3 metres and a flying speed of over 100 kilometres per hour, this is a truly majestic bird with an intriguing lifestyle – but you will learn more of that when your get there.

DAY 4 - Dunedin to Queenstown
This morning you will enjoy a sightseeing tour of Dunedin City before departing for Queenstown.

Travel by train into countryside inaccessible by road, across viaducts spanning the Taieri River and through tunnels carved through the hillside as you wind through the beautiful, remote scenery of the Taieri Gorge. Then traverse the "real outback" high country by coach to Queenstown. Nestled on the shores of Lake Wakatipu Queenstown is a year-round alpine resort that caters for all interests. It enjoys a magnificent setting amid steep mountain ranges and pockets of native bush with the jagged peaks of the Remarkables Range rising from the lake.
Stay: Queenstown (3 nights)

DAY 5 - Milford Sound Day Excursion
Skirt Lake Wakatipu by coach in the shadow of the rugged Remarkables and on through rolling farmland to Te Anau, gateway of the Fiordland National Park. Pass through magnificent beech forests and the Homer Tunnel. Remote, mysterious and uniquely New Zealand, Milford Sound is a spectacular reminder of the forces of nature that shaped this land.

Formed thousands of years ago during the ice ages, Milford Sound is the most dramatic in Fiordland National Park. Here you will find cascading waterfalls, luxuriant forests and the towering pinnacle of Mitre Peak. No matter what the fiord's mood, shrouded in mist or with sun glistening on deep waters, it will inspire you. Enjoy a scenic cruise on Milford Sound before returning to Queenstown by coach - or scenic flight at your own expense.

DAY 6 - Queenstown
A free day to enjoy the many activities available in this region which include jet-boating excursions, golf, bungy jumping, paragliding, gold panning in old gold-mines, cruises on Lake Wakatipu, or simply relaxing beside the lakeside or shopping.