New Zealand's food and wine are almost designed for each other. For a small country, New Zealand has an impressive array of unique food and dining styles which are complemented by top quality wines.

New Zealand's 'Pacific Rim' cuisine style takes its inspiration from regions and countries such as Europe, Thailand, Malaysia, Indonesia, Polynesia, Japan and Vietnam. This unique blend of influences has created a mouth-watering range of flavours and food available from cafes and restaurants nationwide.

For dishes that have a distinctly New Zealand style look out for lamb, pork and venison; salmon, crayfish, Bluff oysters, paua (abalone), mussels and scallops; kumara (sweet potato); kiwifruit and tamarillo; and pavlova, our national dessert, made from meringue and lashings of fresh whipped cream topped with fresh fruit or berries.

While the main centres support elegant, silver-service restaurants, there are many excellent dining establishments from hotels through to the more relaxed cafe-bar dining. There is a wide variety of international food available including Japanese, Indian, Italian, Mexican, Chinese, Malaysian and Thai. There are more than 900 Asian restaurants throughout New Zealand.

Check out our Cuisine and Dining section.

While you are here, take the opportunity to discover more about New Zealand wines. Our white wines, particularly Chardonnay and Sauvignon Blanc, have achieved an international reputation for excellence--and the reds are catching up fast! 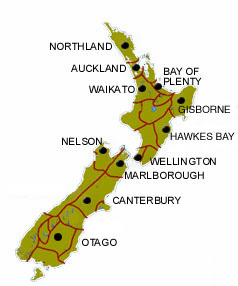 New Zealand has long been famed for its stunning,unspoiled landscape. Equal to the international acclaim for its beauty is that for its fine wines. Climate, geography and human skill have combined to produce highly distinctive, premium quality wines, which are 'the riches of a clean, green land.'

In the warmer and more humid northern regions of Northland, Auckland and Gisborne, Chardonnay might begin to be harvested in late February or early March while in Central Otago, the world's most southerly Chardonnay grapes may first be picked in mid to late April--a difference of six to seven weeks.

New Zealand is a country of contrasts with dense, native forest, snow-capped mountains and spectacular coastline. With wine growing regions spanning the latitudes of 36 to 45 degrees and covering the length of 1000 miles (1,600 kilometres), grapes are grown in a vast range of climates and soil types, producing a diverse array of styles.

The northern hemisphere equivalent would run from Bordeaux (between the latitudes of 44 and 46 degrees) down to southern Spain.

New Zealand's temperate, maritime climate has a strong influence on the country's predominantly coastal vineyards. The vines are warmed by strong, clear sunlight during the day and cooled at night by sea breezes. The long, slow ripening period helps to retain the vibrant varietal flavours that make New Zealand wine so distinctive.

New Zealand's small population, distant location and agricultural economy have earned the country a 'clean, green' image. Visitors often describe it as 'an unspoiled paradise'. New Zealand's winemakers are determined to keep it this way.

Innovative practices in the vineyard and winery which deliver quality in a sustainable and environmental manner, ensure that New Zealand meets a growing world demand for wines that have been produced in a 'clean and green' fashion.

New Zealand's first vines were planted in Northland in 1819, however winemaking almost died out here until a strong resurgence of interest in recent years. The region is now expanding rapidly, although it still rates as the country's smallest.

Grape growing is scattered over three districts: Kaitaia on the west coast in the far north, around the Bay of Islands on the northern east coast, and near Whangarei, Northland's largest city.

Vineyards are sited mainly on flats or gentle slopes. Soils vary throughout the region from shallow clay soils over sandy-clay subsoils to free-draining volcanic structures.

Henderson, Kumeu and Huapai to the northwest of Auckland's city centre, are the traditional winemaking districts of the Auckland region. Cabernet Sauvignon, Merlot and Chardonnay are the most popular varieties here although Sauvignon Blanc, Semillon and other white varieties are also planted.

Auckland's soils are mainly shallow clays over hard silty-clay subsoils or sandy loams. Vineyards are mostly planted in pockets of flat land on the drier east coast or in the shelter of western ranges.

In the early 1980's Waiheke Island, in Auckland harbour, was established as a fashionable district for the production of high quality red wines based on Cabernet Sauvignon, Merlot and Cabernet Franc.

Matakana, on the east coast about one hour's drive north of Auckland city, has also earned an enviable reputation for Cabernet Sauvignon and has since undergone a very rapid expansion in both red and white wine production.

Auckland's most recent premium wine district, Clevedon, has established small pockets of vines in the rolling farmlands about half an hour south of the city.

The Waikato and Bay of Plenty regions south of Auckland represent small but steadily expanding vineyard plantings that occupy scattered pockets of land amidst rolling farmland.

Hawkes Bay is the country's second largest region and has a respected 100 year heritage in wine. The varied topography and wide range of soil types, from fertile silty loams to free-draining shingle, produces a considerable range of wine styles in this large region.

There are 22 categories of soil types on the Heretaunga Plains alone, from stones to hard pans to heavy silts.

Ripening dates for a single grape variety can vary by as much as three weeks between the hot, shingle soils of the Gimblett Road area to the cool, higher altitude vineyards of central Hawkes Bay.

Chardonnay is the most widely planted grape variety but the long sunshine hours attract a high percentage of later ripening red grape varieties such as Cabernet Sauvignon, Merlot, Cabernet Franc and Syrah, as well as the early ripening Pinot Noir.

Located on the country's most easterly tip and closest to the international dateline, Gisborne boasts the world's most easterly vineyards and the first vines to see the sun each day.

The region receives high sunshine hours on coastal plains that are sheltered from the west by a range of mountains. Soils include alluvial loams over sandy or volcanic subsoils of moderate fertility. Vineyards are predominantly sited on flats.

Chardonnay occupies around half of Gisborne's vineyards and has lead Gisbornes grapegrowers and winemakers to christen their region the Chardonnay capital of New Zealand. The balance is planted in mostly white varieties, leaving red grapes a share of only 10%.

Wellington is the official name for the large region which occupies the southern section of the North Island.

Wairarapa, on the lower eastern side of the region, is Wellington's only wine district. Martinborough, as well as being a town, is also the oldest and best known wine area within the Wairarapa region.

Pinot Noir is the region's most planted and certainly most acclaimed grape variety. The success of Martinborough Pinot Noir has to a large extent driven the rapid development of this very dynamic and quality-focused region.

Climatically Wairarapa is more aligned to Marlborough than to any of the North Island regions. The success and style of its Sauvignon Blanc is evidence of this alliance.

Nelson is the country's eighth largest wine region and is an area of artists, artisans and very stylish wines. Viticulture occupies scattered pockets with a range of horticultural activities on the alluvial loam soils of the Waimea Plains and in the folds and valleys of the beautiful hills throughout the district. Soil structure here changes to clay loams over hard clay subsoil.

The region is unusually sited on the western side of the country near the northern tip of the South Island. Mountains to the west of the region provide a rain shadow effect while coastline helps to moderate temperature extremes.

Nelson winemakers specialise and excel in grape varieties that respond to cooler growing conditions. Chardonnay, Sauvignon Blanc, Riesling and Pinot Noir account for over 80% of the region's vineyard area.

When the first Marlborough vines were planted in 1973 few people predicted that the region would become New Zealand's largest and best known winegrowing area in little more than 20 years. The distinctive pungency and zesty fruit flavours of the first wines captured the imagination of the country's winemakers and wine drinkers alike and sparked an unparalleled boom in vineyard development.

Abundant sunshine with cool nights and a long growing season helps to build and maintain the vibrant fruit flavours for which Marlborough is now famous.

Sauvignon Blanc is the most planted grape variety with Chardonnay in second place, followed by Pinot Noir and Riesling. Sauvignon Blanc may be the star but Marlborough has also earned an enviable reputation for Methode Traditionelle sparkling wines as well as a wide range of both white and red table wines.

Canterbury consists of two major wine areas: the plains around the city of Christchurch, where grapes were first planted in the late 1970's, and the more recently developed valley area of Waipara, an hour's drive north of Christchurch.

In the southern area the soils are mainly alluvial silt loams over gravel subsoils while in Waipara they are chalky loams that are often rich in limestone.

Long, dry summers, abundant sunshine and relatively cool growing conditions are a feature in both areas although Waipara, which is sheltered from the coast by a low range of hills, can be significantly warmer.

Chardonnay and Pinot Noir are the most widely planted grape varieties, together making up nearly 60% of the region's vineyard. Riesling is the third most popular variety with Sauvignon Blanc in fourth place. Canterbury is New Zealand's fourth largest wine region.

Central Otago is New Zealand's highest and the world's most southerly wine region. Wines with altitude is the slogan of one winemaker. It is also New Zealand's only true continental climate with greater extremes of daily and seasonal temperatures than are found in any of the country's maritime regions.

Pinot Noir is the dominant grape variety, a status that seems certain to be maintained if demand and accolades are any measure. Chardonnay ranks second with Sauvignon Blanc and Riesling a distant third and fourth.

The wines of Central Otago have a purity, intensity and vibrancy that seems totally appropriate to anyone who has visited the region and breathed the pure mountain air.