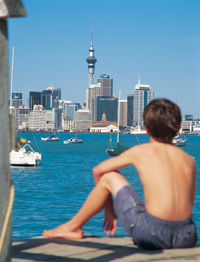 The Auckland region enjoys a warm, coastal climate without any extremes of temperature.

Summers in Auckland are generally warm with high humidity, while winters are mild and damp. Plenty of rain is experienced throughout the year, but mainly in winter (June, July, August).

When visiting Auckland, it's a good idea to pack a rainproof jacket as well as sunglasses, sun hat and sunscreen during the spring and summer due to New Zealand's high UV rating.

The weather in Auckland can be changeable as the region is influenced by weakening cyclones and cold fronts, which can cause extreme conditions such as hailstorms. Due to the changeable Auckland weather conditions, it is recommended that you prepare for 'four seasons in one day'.

The average daily temperature in Auckland during the summer is 23°C (74°F), while winter temperatures are on average 14°C (57°F).

Auckland is one of New Zealand sunniest regions with 2060 annual sunshine hours. The region is also very lush, with a mean annual rainfall of 1240mm.