New Zealand is a recognised international ski holiday destination, with northern hemisphere skiers in particular appreciating our reverse seasons. New Zealand offers numerous ski areas, one Nordic cross-country area and a host of heliskiing operators, where choppers are used to lift skiers to the top of long, isolated stretches of snow.

Need a rental car at a competitive price to take you to the skifields? Visit Apex Car Rentals. 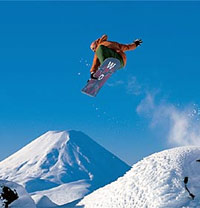 You'll also find fantastic, fast terrain for snowboarding in New Zealand. The sport has grown in New Zealand in recent years and all major fields welcome those passionate about this sport. There are some excellent natural and man-made halfpipes as well as dedicated terrain parks, and some of the most awesome off-piste powder snow around.

Snowboard shops, instruction and facilities are widely available at most New Zealand slopes.

Most commercial fields have highly qualified ski schools, catering for the novice through to experienced skier and snowboarder, equipment rental, and cafe/restaurant facilities.

Coming to New Zealand this winter? Don't miss the opportunity to ski some of the best ski fields in the world!

Send a skiing related E-Postcard to your friends. 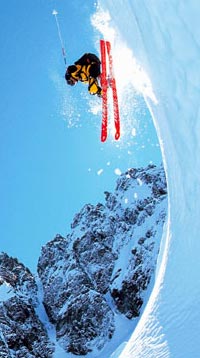 New Zealand's ski seasons vary but are generally, in the South Island, from early June until early October, and in the North Island, from late June to mid November. The prevailing westerly weather patterns and maritime climate produce unique conditions for snow sports.

Daily snow reports are available giving the most current snow and weather conditions, road conditions and chain requirements, boundary and closure information, and which lifts and facilities are operating.

Most skiers commute daily to the slops from nearby ski towns. Unlike other countries, New Zealand's commercial ski areas are generally not set up as resorts with chalets, lodges or hotels. Rather, accommodation and apres-ski nightlife are often in surrounding towns that connect with the main ski areas via daily shuttles.

Most of New Zealand's ski fields have plenty of rental equipment avaliable on hand for your skiing and snowboarding trip. There's plenty on offer - Recreational and performance skis and snowboards, as well as jackets and pants.

Ski, boots and poles can be hired for around NZ$40 to NZ$50. Snowboard equipment is a little bit more expensive, but usually still between NZ$40 and NZ$50 for snowboard and boot hire.

Jackets and pants can also be hired from NZ$30 for the full day.

All-day lift passes for commercial fields are on average NZ$75 to NZ$90 per adult, club fields are about NZ$65 for non–members. Club members usually receive a discounted price.

Send a skiing related E-Postcard to your friends.