Skip to main content
Home »New Zealand »Getting To Nz

Getting to New Zealand

New Zealand is surrounded by water and quite isolated from the rest of the world (this is a good thing). It's a small country similar in size to Japan or Great Britain with a population of around 4 million people. As you can't drive to New Zealand, the main option is to fly or take a cruise ship. In fact, up until the 1960's, the only way to get to New Zealand was by boat.

Flight times vary with long haul flights from Europe about 24 hours while New Zealand's neighbours Australia are only about 3 hours away. 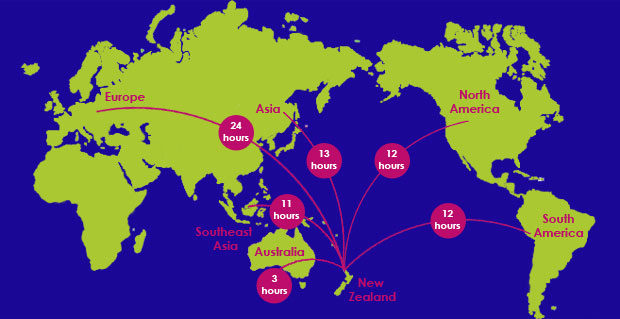 With around 30 airlines having New Zealand as a destination, the choice is quite wide and varied. Check pricing directly with the airline as prices often vary depending on the time of the year and any specials they maybe running.

There are two main domestic airlines flying between towns and cities in New Zealand.

Besides the main airports, the two domestic airlines fly across the country to many smaller centres allowing travelers to get around the country easily.

Why not consider a cruise to New Zealand? Cruises are a popular and relaxing way to visit the country and its 15,000km of coastline. Cruise ships are a comfortable and often luxurious experience with the most common boarding places being Australia and the Pacific. Round the world cruises also often have New Zealand as a destination stopover.

New Zealand has many ports and each is usually one days sailing of each other. While there are hundreds of places around the country with sea access, the main ports in New Zealand are situated in main centres. Cruise ships also anchor in several other popular destinations and ship passengers to shore for a day or two to enjoy the local sights.