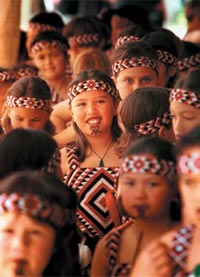 The origins of the haka are deeply rooted in the mists of time. It is a history rich in folklore and legend that reflects Māori heritage. New Zealand has grown up immersed in haka since first encounters between Māori and early European explorers, missionaries and settlers.

While recent tradition suggests the haka was the domain of men exclusively, legends and history reflects a different story. Indeed, the story of the most famous haka, Ka mate!, proves to be about the power of female sexuality.

According to legend, the haka was derived from the sun of god Ra. He had two wives: Hine-raumati, who was the essence of summer, and Hine-takurua, the essence of winter.

Ra and Hine-raumati lay together and gave birth to a son called Tanerore. On hot summer days it is possible to see the light dancing. Legend has it that this is Hine-raumati's son, Tanerore, performing for his mother and the wiriwiri or trembling shimmer is today reflected in the trembling of the haka performer's hands.

Māori myths and legends are peppered with stories about the haka.

Send a haka related E-Postcard to your friends.

History of the Haka

The first use of the haka in the natural world was attributed to the chief Tinirau and some of his womenfolk.

Tinirau desired revenge for the killing of a pet whale, so he sent a hunting party of women to find the man responsible, an old tohunga or priest called Kae. The women didn't know what Kae looked like, but they knew he had uneven teeth that overlapped.

When the women arrived at Kae's village they performed the haka to force a smile from the men in order to uncover Kae's identity.

Kae was captured and taken back to Tinirau's village where he was killed.

Meaning of the Haka

To most people, the haka is a war dance. This is understandable as many have seen the haka performed as a pre-battle challenge to their opposition.

But the word "haka" simply means a dance, or a song accompanied by dance. While they are the correct terms to associate with the haka, they do not do justice to the life force, the actions, words, rhythm, themes, meaning, style or history that are the haka.

While there are many variations between the types of war dance the common feature is that they are all performed with weapons.

In pre-European and early contact times, the haka was used as a part of the formal process when two parties came together.

Succinctly put, there was a challenge from the tangata whenua or tribe from that area, followed by a response from the manuhiri or visiting party.

The encounter concluded with a tangata whenua performing a haka peruperu. The visitors would then respond with their own haka. Following speeches by both parties, they each moved together to hongi, the traditional greeting of pressing noses.

The elaborate form of the traditional challenge is not often seen these days. It is largely reserved for special occasions such as visits by senior dignitaries. However, the principles that underpin the traditional rituals are still retained in a modern form.

How the Haka is used Today 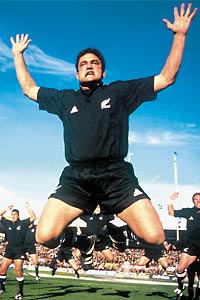 New Zealanders have grown accustomed to the use of the Haka by sporting teams. They thrill to the spectacle of the All Blacks forming ranks prior to kick off.

The modern All Blacks perform the Haka with passion and pride. They have reclaimed the dignity and mystique attached to this traditional art form and in the process, increased its recognition as an icon of New Zealand.

The Haka has come to symbolise the power of the All Blacks and their status in the world of rugby. The team leaves an impression of invincibility and ruthlessness. That impression is in no small part due to the potency with which the All Blacks perform the haka.

Today, the New Zealand Army also has its own unique haka, opened and ended by female soldiers, acknowledging their special place in the armed forces.

The haka has become a unique form of national expression.

Because there are tens of thousands of New Zealanders living overseas, it is highly likely they will engage in the performing the haka in the foreign locations.

New Zealand trade delegations and other official functions overseas are increasingly requesting haka groups to accompany them. These are just some of the ways haka is being internationalised.

In this global village, the haka is a truly unique symbol of New Zealand identity. For it to endure as an icon, New Zealanders increasingly recognise that the haka must be treated with respect.

Send a haka related E-Postcard to your friends.