About The Kingston Flyer

Please Note: The Kingston Flyer has been out of operation since 2013. There are plans to resume operation, which could see services resume late in 2019.

The Kingston Flyer is New Zealand's famous vintage steam train set in the spectacular mountain scenery of the Queenstown Lakes District. When gold was discovered in the Wakatipu district in 1862 the need to connect the district by steamships and steam trains became apparent. The railway line at last reached Kingston on July 10, 1878 and a public holiday was declared by Queenstown Borough and Lake County Councils. 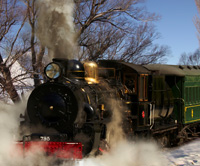 The Kingston Flyer puffing
its way across the plains
(www.kingstonflyer.co.nz/)

The express passenger steam train known as "The Flyer" serviced Kingston-Gore on Mondays, Wednesdays and Fridays and Kingston-Invercargill on Tuesdays and Thursdays from the 1890's. During peak holiday periods she also carried passengers from Dunedin to Kingston to meet up with Lake Wakatipu steamboats connecting with the popular holiday destination of Queenstown.

The service was replaced by buses and passenger numbers declined through the 1950's. The final Kingston Flyer operated during the Easter holiday of 1957. Trains continued to run on the Waimea Plains Railway until 31 March 1971.

The New Zealand Government came up with a plan to save the historic steam train and funded its restoration in 1971. The atmosphere of the 1920's was retained and remains today featuring polished brass and steel work, white painted wheels, red fluted side rods, and glossy black paintwork.

The driving force and face of The Kingston Flyer was Russell Glendinning who is credited with saving and restoring the Flyer back in the 1970's. This was acknowledged when he received an MBE in 1975 New Year Honours List. Russell's career began at age 14 in Dunedin in 1953. His apprenticeship took 7 years. In 1964 he became a First Class Driver and in 1969 a Special Class Driver. Russell's passion and energy continues to this day, he still occasionally drives the train, shines the brass and can be seen regularly out maintaining the track.

In 2009 the company that previously owned the Kingston Flyer went into receivership with the Flyer's future uncertain until it was bought by David Bryce in 2011.

Celebrating fire and ice this winter, New Zealand's most famous vintage steam train the Kingston Flyer is stoking up a party for all ages at Kingston as part of the American Express Queenstown Winter Festival.

Evoking a bygone era with brass shined, leather polished and fires stoked, the iconic and much-loved train will be firing up for The Kingston Flyer Steam Powered Party on Sunday July 1.

Kingston Flyer owner David Bryce said he was "thrilled" to have the Flyer taking part in the festival for the first time, and was looking forward to welcoming visitors to Kingston who might otherwise not have the opportunity to ride the train during winter.

"While we're normally closed for winter to the general public we are open for special charter and C&I business," he said.

"The winter festival party gives us the opportunity to show people just how beautiful it can be to see the train under a full head of steam, heading to Fairlight and back surrounded by snow-capped mountains and stunning scenery."

Mulled wine and roasted chestnuts will be served in toasty warm carriages plus there will be live entertainment and prizes for the best period costumes when the train rolls back into the station.

Bus transfers will leave Queenstown at 10.30am, and the train will depart Kingston at 11.30am.

Advance reservation is recommended as seats are limited. Seats, transport and lunch packages can be booked from May 1st at www.kingstonflyer.co.nz and prices for the train ride only are Family (2 adults, 2 children) $112.50, Adult $45 and Child $22.50. Under 5's travel for FREE on the train. The return trip takes one-and-a-half hours.

Mr Bryce said The Kingston Flyer had enjoyed a hugely successful first season under its new ownership, after languishing on its rails for two years.

"The people of Kingston and Queenstown came very close to losing their beloved Flyer forever, so we've been absolutely delighted with the level of support we've had this past summer," he said. "We're really looking forward to fully re-opening again on September 29th for the summer season."

On July 1 people are encouraged to make the trip to Kingston before returning to Queenstown for the final night of festival celebrations. This year, Sunday is the 'new Tuesday' as the Auckland Airport International Mardi Gras will be festival's closing party.

For more information on places to stay, things to do or how to travel around Queenstown, please see: