Art and Culture in New Zealand

Today, New Zealanders are largely sophisticated and highly educated urban dwellers. Members of a unique and vibrant multicultural society, New Zealanders have a background of quiet but rugged individualism, self-reliance, with a famous 'kiwi ingenuity' and a genius for invention - qualities still evident in the population today. Kiwis are embracing 21st century technology and culture in record numbers.

New Zealand has an increasingly lively and multicultural arts scene, forming an active part of New Zealand life. Most travellers are attracted to New Zealand for the stunning, unspoilt landscapes and opportunities for easy, outdoor adventure, but once here, they find out that it's also a place to discover a fresh world of creativity within the art and culture in New Zealand.

A unique brand of creative culture in New Zealand has grown from a fusion of highly distinct cultures - Māori, Polynesian, Asian and every kind of European. Traditional Māori art and culture in New Zealand can be enjoyed throughout the country, while professional theatre companies, orchestras and opera can be found in the main centres.

As well as enjoying the unique Māori culture in New Zealand, be sure to check out the variety of museums, art galleries, theatre, music and dance.

Hayley Westenra is a New Zealand singing sensation. Born 1987 in Christchurch, Hayley's classical vocal skills have been rated alongside Bryn Terfel and Andrea Boccelli. Her first internationally-released album 'Pure', which features the Māori classic Pokarekare Ana, was a chart-topping success in the UK and has sold over two millions copies worldwide by early 2006. 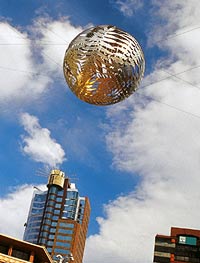 Michael Tuffery, notorious for making a life-size bull out of flattened corned beef tins, recently completed an artist's residency at Artspace Mackay in Queensland, Australia. His famous corned-beef bull can be seen at Te Papa Museum in Wellington.

Internationally recognised Māori artist, George Nuku, is a carver and sculptor as well as a rangatira chief. His works vary from delicate jade and pearl amulets to the entire side of a two-storey building.

George's art has also been featured on the covers of many magazines, including Vogue, as well as in films. Some of his work was showcased in the National Geographic All Roads Film Festival - a multi-media indigenous peoples and minority culture event incorporating film, live music and art held in Los Angeles and Washington, D.C. in October 2004.

New Zealand has a fast-booming film industry with several major film production companies choosing to shoot here. At the same time, New Zealand's indigenous film has received a popular boost in the wake of Whale Rider. Two short New Zealand films will be presented at the National Geographic All Roads Film Festival: Tama Tu and Two Cars, One Night, both directed by Taika Waititi.

Gumboots, 'Buzzy Bee' toys, marching girls, a meringue dessert, shell ashtrays and a cookbook may not seem terribly important objects. But to many Kiwis (New Zealanders), such things assume vital importance as major icons of Kiwiana!

What is Kiwiana? It could be described as all the weird and wonderful quirky things from years gone by that contribute to our sense of nationhood - our kiwi culture in New Zealand.

Every year, art in New Zealand comes off the wall at the Montana World of Wearable Art Awards™ in Wellington. This extraordinary show aims to "take art off the wall and out of static display, to adorn the body in wildly wonderful ways, to celebrate such creativity in lavish and unique theatrical spectaculars that inspire all'.

Click here to view tourism operators for art and cultural in New Zealand.