Freshwater or salt - New Zealand is an angler's paradise offering some of the best opportunities for fishing in beautiful, isolated and pristine locations. In a country with such a vast coastline and hundreds of rivers and lakes, it is little wonder that fishing is a popular pastime for New Zealanders. Anglers come from all over the world to try their luck in the crystal clear waters.

New Zealand was put on the big game fishing map after a visit by legendary American writer Zane Grey in the 1920's. Excellent salt water game can be found off the East Coast of the North Island as far south as Whakatane. Catches include tuna, blue and striped marlin, yellowtail kingfish and shark. 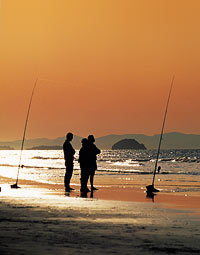 The following are some tips to help make the most of fishing New Zealand's rivers, lakes and coastlines:

Increases in catch rates from rivers with 'catch and release' regulations have been spectacular in many parts of North America, most notably Montana. 'Catch and release' was introduced to New Zealand by visiting American fly-fishers and is a predominant philosophy today, particularly in pristine wilderness rivers.

The 'catch and release' philosophy is in keeping with New Zealand's dedication to conservation and sustainable fishing. Even in non-release areas, many anglers adopt the catch and release principle, or simply bag only their last catch of the day to take home for eating.

When fishing the catch and release method, anglers should realise that prolonged handling decreases the fish's chances of survival. Some tactics to ensure fish live include using tackle strong enough to bring the fish in quickly, so it doesn't get overtired, avoiding damage to the eyes, gills, fins and body, and keeping the fish in the water so it can breathe.

If you want to measure the fish, do it against your rod or take a photo holding it in the water. When the fish is released, it should be supported from underneath and let go facing the current. High summer temperatures lessen the fish's chance of survival too, so care should be taken to quickly return fish to the water by gently lowering it in.

The Nelson-based Cawthron Institute has undertaken an interesting study on the effects of 'catch and release' fishing. 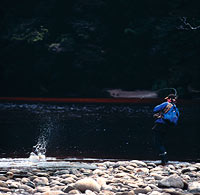 It also says fish are much hungrier during a spring tide and just before a storm is about to break, that bigger fish catches are usually made during the day 'peak period' rather than the night one, and that 'peak fishing' doesn't necessarily coincide with dawn, dusk, high or low tides.

Ken Ring is a mathematician with a passion for numbers. He is also a long-range weather forecaster whose month-ahead forecasting columns are syndicated throughout New Zealand, and are used by farmers, fishermen, pilots, travellers and all event organisers. Ring has taken the Māori fishing calendar one step further over his years of research, predicting the weather through lunar activity.

New Zealand offers great sporting style lodges, these vary from wilderness lodges set amidst grandeur to intimate retreats where anglers are the only guests.

The cuisine is often exceptional, the welcome and hospitality warm and relaxed, and the fishing advice freely available through resident guides. View our great selection of lodge accommodation in New Zealand.