New Zealand, the home of Sir Edmund Hillary, provides a superb environment for mountaineering. The mountains are a dominant feature of the New Zealand landscape with both islands providing opportunities for climbers of all abilities, and a perfect training ground for overseas adventures.

For mountaineering in New Zealand, the South Island is well known for the spectacular Southern Alps, forming the backbone of the island. They offer an impressive selection of challenging climbs, with 19 peaks over 3,000 meters high, including the well known Mt Cook, New Zealand's highest mountain. 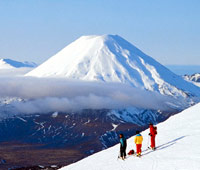 Most tracks can be walked year-round, although some of the high altitude tracks in the South Island are restricted by winter weather. Commercial guides are available and specialist companies run courses covering a range of climbing experiences. The climbing season is generally November to March, but for experienced climbers the winter months can also produce extended calm, fine spells. The New Zealand climate can be fickle with winds and storms picking up extremely fast. 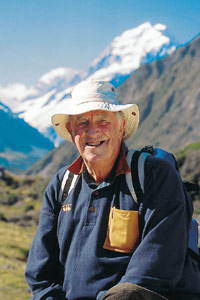 New Zealand made Sir Edmund Hillary, who with Tensing Norgay conquered Mt Everest for the first time 50 years ago. And Sir Edmund Hillary has helped to make New Zealand. The publicity he generated with his 1953 climb sparked the world's curiosity about the island nation in the south western corner of the Pacific.

Hillary's interest in mountaineering began on a school trip to Mount Ruapehu, a tall volcano in the central North Island. In summer, when the mountain's snow cover shrinks to a small top knot, climbers can scramble over rugged lava flows and scree slopes to the summit. From the top, it's possible to see both coasts of the island. This region is also home to a one day walk known as the Tongariro Crossing. Steaming volcanic craters and weird rock formations make the crossing an otherworldly experience.

After WWII, in preparation for his assault on Everest, Hillary climbed the Southern Alps in summer and winter. Today, customised guiding makes it possible for fit non-climbers to follow in at least some of Hillary's footsteps. In the Mount Cook region, treks across mountain passes provide plenty of challenge for first-timers, while experienced mountaineers have a choice of thirty peaks over 3000 meters, most of which have long glacier approaches, which are serious climbs in their own right.

Hillary often praises his home country as a destination for adventurers. And by adventure, he means across country as well as straight up. Around Fiordland and Mount Aspiring National Park, trekkers can vanish into the wilderness for days at a time. The Routeburn, Hollyford and Milford tracks are well known - and they thoroughly deserve their fame. The Hump Ridge Track, which begins on the south coast of Southland, is one of the country's newest walking adventures. Highlights include historic wooden viaducts and coastal segments with seal encounters.

Those who visit New Zealand to conquer mountains and tracks will also enjoy the other forms of 'expeditionary' adventure that thrive in the remarkable landscape. Cycling through the vineyards of the Hawke's Bay, kayaking around the Abel Tasman National Park and sailing around the Bay of Islands are just some of the possibilities.