Off the Beaten Track to... Aorangi Forest Park 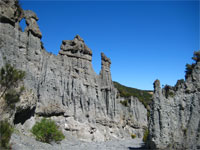 It's well worth driving to the Aorangi Forest Park in the Wairarapa (east of Wellington on the North Island). This park features some of New Zealand's most striking landforms and spectacular views which can enjoyed after a short walk. These landforms include: the Putangirua Pinnacles, earth pillars formed by the erosive forces of rain and floods; high slabs of rock known as Kupe's Sail and the coastal Whatarangi Bluff.

The park is also of interest for its fur seal colony, historic lighthouse, archaeological sites and sites of Māori occupation - a kainga (a resting and eating place for travellers) and the Putangirua Pa site located on a steep outcrop.

About 9 million years ago, when the Aorangi Range was an island screes poured gravels onto the coast, much as they do today around Cape Palliser. The Putangirua Stream has exposed this ancient layer of gravels to the erosive forces of rain and floods. Where cemented silts or rocks within the gravel beds prove more resistant than the underlying sediments, spectacular individual pinnacles or "hoodoos" have been formed.

More Off the Beaten Track Suggestions

If you want to discover some of New Zealand's hidden treasures, travel to some out-of-the-way places and see sites that many travellers and tourists miss out on, look at more of our 'Off the Beaten Track' suggestions.