Skip to main content
Home »Off the Beaten Track »Kawakawa

Off the Beaten Track to... Kawakawa

Kawakawa is a small town in the North Island of New Zealand. Located in Northland on the State Highway 1, it has a tiny population of just over 1,000. Originally a service town for the local coal mining industry, its economy is now based around farming.

So, why stop here on the well-beaten track to the Bay of Island's more traditional tourism destinations of Paihia, Kerikeri, Russell and Waitangi? Well, the answer is toilets. Public toilets. But not just any old public toilets, these are some of the most photographed toilets in the world designed by the experimental, provocative (some would add eccentric), Austrian architect and painter, Friedensreich Regentag Dunkelbunt Hundertwasser. 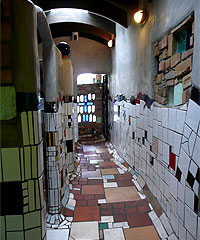 Born Friedrich Stowasser in Vienna, by the end of the 20th century, Friedensreich Regentag Dunkelbunt Hundertwasser had become one of the best-known Austrian artists in the world. He had made his home on a small farm on the Waikino peninsula, east of Kawakawa in New Zealand for 29 years until he died in February, 2000.

The toilets in the centre of the town have become a mecca for fans of his work. Hundertwasser himself regarded as toilets as similar to churches, because in both places one could meditate. His philosophies and ideas, as well as his art and architecture are celebrated in these toilets. They are his only finished work in the southern hemisphere and the last major works he completed before his death.

The toilets were opened in a dawn ceremony and the finished product is a work of art, from the grass roof, to gold balls, ceramic tiles, bottle glass windows, mosaic tiling, copper handwork, cobblestone flooring, individual sculptures and a living tree integrated into the design structure.

Other Things to See and Do

Click on the links below to help plan your holiday in the Bay of Islands: