Off the Beaten Track to... White Island

Estimated to be 150,000 to 200,000 years old, White Island is New Zealand's only live marine volcano and is situated 48 kilometres from the east coast of the North Island of New Zealand, in the Bay of Plenty. The nearest towns are Whakatane and Tauranga. Its official name is Whakaari/White Island, although it is most well-known as White Island. 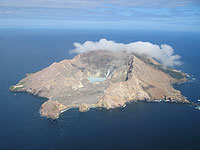 The Māori name for the island, Te Puia o Whakaari, has translated both as “The Dramatic Volcano” and “that which can be made visible”. Its more common name, ‘White Island’ was given to it by Captain Cook in 1769 because it always appeared to be in a cloud of white steam. He failed to notice it was a volcano. Nowadays, however, White Island is regarded as one of the most fascinating and accessible volcanoes on earth. Sitting on an alert rating of 1, it is constantly active—it breathes, it roars, it steams and it hisses.

Walking on White Island has been likened to walking on the moon with no vegetation and lush beds of yellow and white sulphur crystals amongst hissing, steaming, bubbling fumaroles. Little sign remains of past human endeavours such as sulphur mining.

In the late 1830s, ownership of the island passed from Māori hands allegedly for the price of a few barrels of rum, and continued to change until it ended up with the Buttle Family Trust in 1936. Although the New Zealand government wanted to buy the island from the Buttle family in 1952, a compromise was reached instead which declared White Island a private scenic reserve. For many years, the public had free access on to the island until permit-controlled access in 1995.

In 1997, the owners of White Island Tours were appointed official guardians of the island by the Buttles and access is now only granted through designated tourist operators. As a result, White Island is in pristine condition and is a fascinating natural laboratory.