Over 650 years ago, Auckland, New Zealand was a Māori settlement. The Europeans purchased the land from the Māori people through the Treaty of Waitangi signed in 1840.

Auckland, known as Tamaki Makau Rau, meaning 'isthmus of one thousand lovers', was originally a Māori settlement. After purchasing the land from the Māori, European settlers began to arrive and colonise the land. 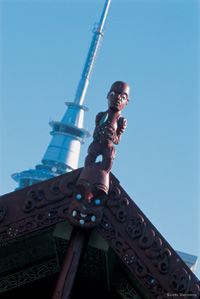 Auckland was first settled by the Māori people in approximately 1350. The Māori constructed terraced pa (fortified villages) on the volcanic peaks of the area then known as Tamaki Makau Rau.

Because the isthmus is narrow—around eight kilometres wide with Mount Eden and One Tree Hill at its narrowest point—the area had great strategic qualities. The isthmus also had highly productive soils providing agricultural opportunities. The two harbours provided diverse seafood.

Ngati Whatua and Tainui, the two main tribes traditionally living in the area, fought over the land.

Eventually, with the aid of the Europeans and guns traded with them, Te Kawau a chief of Ngati Whatua defeated the Tainui.

In 1840 Te Kawau, the then most prominent chief of the Ngati Whatua, offered Governor Hobson land around the present central city of Auckland. He and six other chiefs travelled the Bay of Islands to make the offer and signed the Treaty of Waitangi on 20 March 1840.

In 1840, after purchasing the 3,000 acre segment from the Ngati Whatua, Auckland came into existence as a British colonial settlement. The first governor, Lieutenant William Hobson, chose the site as the capital of New Zealand.

What principally appealed were the splendid Waitemata and Manukau harbours and proximity to both fertile land and river access both north and south.

Within a year nearly 2,000 people were living in primitive wood and raupo dwellings. By mid-century there were about 3,500. A census conducted in 1841 counted only 125 'upper class' people in the region, vastly outnumbered by the 250 mechanics, 150 agricultural labourers, 100 shopkeepers and 100 domestic servants recorded.

In 1865 Wellington became the capital of New Zealand, replacing Auckland. In 1868 Government House moved there too.

By 1900 Auckland was the largest New Zealand city.

To help plan your Auckland holiday choose from the main categories below:

Regional Information
Key information and facts about the Auckland region.

Activity Highlights
Major activities and attractions in the Auckland region.

History
History of the Auckland region.

Choose from our accommodation, attractions, tours, transport or visitor information categories below to find a tourism operator in Auckland.