Don't just pass through Canterbury. Stop and explore its beautiful natural history, and the story of how it became home to the largest city in the South Island of New Zealand.

The Canterbury area was long settled before British explorer Captain Cook sighted New Zealand in the 1770s. The vast plains set between the mountains and the sea are patchworked with the patterns of rural life. Hundreds of years ago, Māori moa hunters worked these plains leaving a rock art record of their successes.

The beautiful Akaroa harbour was settled by the Ngai Tahu Māori tribe before European arrival, and is the only site of attempted French settlement in New Zealand.

Send a Canterbury related E-Postcard to your friends. 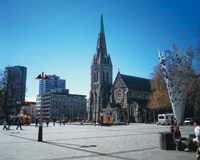 Cathedral Square is the urban heart of Canterbury. As its name suggests, it's directly in front of the city's most famous cathedral - Christ Church.

The cathedral was designed in the gothic revival style by prominent English architect Sir George Gilbert Scott. Although its foundation stone was laid in 1864, construction wasn't complete until 1904. The timber was sourced from Banks Peninsula—over 50,000 pieces of matai and totara were used in the roof alone. The stone was sourced from Castle Hill in the Canterbury high country, from Amberly in North Canterbury and from the nearby Port Hills.

Open every day, Christ Church welcomes visitors. For a small charge you can climb the Cathedral Tower and enjoy the amazing views of the central city.

For many years Cathedral Square was a busy road intersection, but today much of it is closed to traffic. Several large hotels are situated around the perimeter of the square and there's an information centre opposite the cathedral. Regularly, you'll hear the rattle and "ding ding" of an approaching tram. The Christchurch Tramway plies a circular route around the city's major highlights - you can jump on one of the restored historic trams at any time and buy tickets from the driver.

The Charm of Akaroa and Banks Peninsula 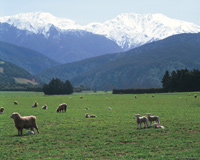 A one and a half hour drive south-east of Canterbury, Banks Peninsula is the result of violent eruptions from three ancient volcanoes. The spectacular coastline of Akaroa Harbour and the surroundings bays are the remaining legacy of earth's fury.

The Ngai Tahu Māori tribe had already discovered the charm of the location well before Captain Cook sighted Akaroa Harbour in 1770s. Akaroa is the site of the only attempted settlement by the French in New Zealand. Their influence is still evident in this vibrant tourist town—look for French street names, quaint historical buildings and inspired cuisine.

There are various day walks available through Peel Forest Park in South Canterbury. Take a walk through the Te Wanahu area to some of New Zealand's finest totara trees. One of them measures almost three metres across and is believed to be about 1,000 years old.

A day trip to Little Mount Peel yields spectacular views across the Canterbury Plains to the coast.

To help plan your Canterbury holiday choose from the main categories below:

Send a Canterbury related E-Postcard to your friends.

Regional Information
Key information and facts about the Canterbury region.

Activity Highlights
Major activities and attractions in the Canterbury region.

History
History of the Canterbury region.

Choose from our accommodation, attractions, tours, transport or visitor information categories below to find a tourism operator in Canterbury.