Hawke's Bay has a rich history, interwoven with the dramatic consequences of natural disasters, and steeped in Māori history and mythology.

Captain Cook first landed in Napier, Hawke's Bay, in 1769, when he sailed down the east coast of the North Island.

Traders, whalers and missionaries were the first of the European settlers to the region. In the 1850's farmers and hotel keepers began to arrive in the region.

Napier is the largest city in the Hawke's Bay region. In 1851 the Crown purchased the Ahuriri block from the Māori.

In 1854 Mr Alfred Domett was appointed Commissioner of Crown Lands and Resident Magistrate at Ahuriri. The town was named Napier in honour of Sir Charles Napier, the hero of the Battle of Meeanee in the Indian province of Scinde.

Early Napier consisted of an oblong mass of hills almost entirely surrounded by water. The town flourished and became a well established commercial centre with a growing port, servicing a wide area. 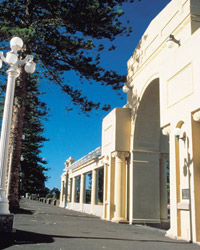 On Tuesday 3rd February 1931, most of the Hawke's Bay district suffered a disastrous earthquake 2.5 minutes in length.

The earthquake rocked Napier almost totally leveling all buildings in the inner city. Some areas of land were raised by as much as eight feet, and approximately 4,000 hectares of sea bed became dry land. The current site today is the Napier airport and also residential and industrial property developments.

162 people in Napier and a total of 258 people in the Hawke's Bay area lost their lives.

The extensive rebuilding of Napier in the 1930s was in the popular Art Deco flavour of the time. Some of the Art Deco buildings were subsequently replaced with contemporary structures during the 1960s, 1970s and 1980s, including the Art Gallery. However, most of the centre remained intact for long enough to become recognized as architecturally unique. Since the 1990s the architecture has been protected and restored.

Choose from our accommodation, attractions, tours, transport or visitor information categories below to find a tourism operator in Hawke's Bay.