The North Island of New Zealand has a hugely diverse landscape, from the rolling farmland of the Waikato, to the rugged ranges of the Coromandel. View North Island scenic video.

The North Island is the smallest of the two main islands of New Zealand, and as its name indicates, is the northern-most of the two islands. Its northern location means it enjoys a warmer, more temperate climate than much of the South Island, and is much more vastly populated.

The northern areas of the North Island enjoy a sub-tropical climate. The centre of the island is primarily a volcanic landscape with vast forests, volcanic peaks, and picturesque lakes. The eastern side of the island is covered with vineyards.

The North Island is home to the largest city in New Zealand—Auckland, also known as the 'City of Sails', and the Capital City of New Zealand—Wellington. 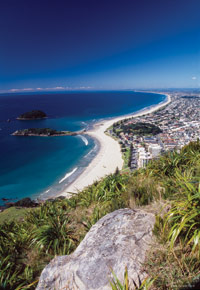 Situated in the Hauraki Gulf, Great Barrier Island has unspoiled beaches, native bushland and is home to several unique plant and bird species. The kind of rugged untouched beauty that you'll see here is getting harder and harder to find on this planet. The native bush is laced with walking tracks, which lead to secluded natural hot springs and historic Kauri dams.

White Island, a still active volcano, is one of the most amazing natural experiences in New Zealand. The vent is below sea level but shielded from the sea by high crater walls. Although surrounded by sea water, the vent is chemically sealed from it. This sealed zone traps an acid hot water system, which is derived from rainwater. As the island is also very accessible, it is internationally important for scientists and vulcanologists.

Rotorua is a place that provides an entirely different experience. Sneaky threads of steam issue from parks, pathways and streets and the occasional scent of sulphur wafts through the air—a hint of the geothermal activity found just minutes from the city centre.

Main Regions in the North Island

To help plan your North Island holiday choose from the main categories below:

Regional Information
Key information and facts about the north-island region.

Activity Highlights
Major activities and attractions in the north-island region.

Choose from our accommodation, attractions, tours, transport or visitor information categories below to find a tourism operator throughout the North Island.