Lake Taupo has a violent and traumatic history. For 27,000 years the volcano erupted, forming the giant crater that is now Lake Taupo.

Lake Taupo was the result of huge volcanic eruptions creating the giant basin that is today Lake Taupo.

Several hundred years later Nagtoroirangi brought his people to settle the land. They struggled with the harsh climate and unfertile soil for many years until the European settlers began to arrive in the 1800's.

Taupo itself was first built in 1869, but did not flourish until much later in the 1950s after the soil had been cleared and fertilised.

Lake Taupo was created approximately 27,000 years ago by a huge volcanic eruption. According to geological records, the volcano has erupted 28 times since then.

Oruanui is the largest eruption that occurred. It ejected an estimated 1,170 cubic kilometres of material and caused several hundred square kilometres of surrounding land to collapse and form the caldera—"a large crater formed by volcanic explosion or by collapse of a volcanic cone". 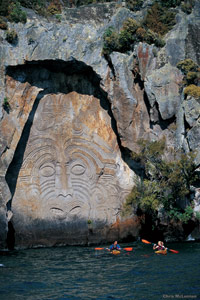 Māori legend states that the Oruanui eruption sent so much ash into the atmosphere that the sun was blocked across the entire world for two weeks.

There have been no more eruptions from the volcano, however it is considered to be dormant not extinct.

Māori legend explains the lake a different way. When Ngatoirangi, the chief tohunga (priest) of the Arawa people, first saw the region he was dismayed to find a barren basin.

Realising his people needed resources to live, he plucked a large totara tree and hurled it into the crater to seed a new forest. His aim was true, but the wind flipped the totara and it landed upside down, piercing the ground with its branches. Water gushed up through the holes, filling the basin and creating Lake Taupo. 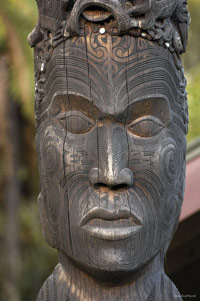 Māori settlement of the Lake Taupo region is estimated to have been approximately 700 years ago. Nagtoroirangi led his tribe, the Ngati Tuwharetoa, to the area. However, due to the many harsh volcanic eruptions, the soil was poor, the winters were harsh, and the lake did not carry much life as a source of food.

The tribe survived however and built pas (settlements) at the more fertile end of the lake at Pukawa, Te Rapa, Waitahnui and Motutere.

Early European settlement mostly consisted of missionaries who came and built churches and converted the Māori to Christianity.

In 1869 Taupo was founded as an Armed Constabulary post. Not much development occurred in the town for approximately 50 years. Due to cobalt deficiency in the soil the land could not be farmed until it was cleared and fertilised. This did not happen until the 1950s.

After this Taupo flourished. Farming was successful, forestry was planted, a geothermal power station and hydro-electric schemes were built. The success of the region saw improved roading and buildings bringing people, and importantly, tourists, to the region.

To help plan your Taupo holiday choose from the main categories below:

Regional Information
Key information and facts about the Taupo region.

Activity Highlights
Major activities and attractions in the Taupo region.

History
History of the Taupo region.

Choose from our accommodation, attractions, tours, transport or visitor information categories below to find a tourism operator in Taupo.