On the lush surface of the Waikato region, the scenery is green to the extreme. Fertile soils, reliable rainfall and kind temperatures have created a pastoral heaven.

Below the surface, miracles have been wrought with water and limestone. Vast cave systems, huge sink holes and underground streams provide huge scope for adventure.

The Splendour of Hamilton Gardens 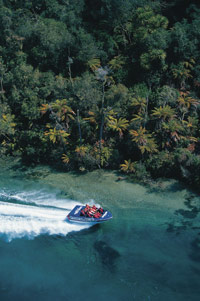 The Waikato River is the longest river in New Zealand. Rising in the area north east of Taupo, it then flows for 425 kilometres through the Waikato region until it reaches the Tasman Sea at Port Waikato, north west of Hamilton.

The Waikato became a working river when Tainui migrated to the region and began to farm its banks. Eventually, they saw the river as being inextricably linked with their own history. The river was the scene of several skirmishes between the British and the Waikato tribes in 1863 - 1865.

Exploring the Mountains of Pirongia

The Pirongia Forest Park includes three extinct volcanoes—Mount Pirongia (959 metres), The Cone (945 metres) and Mount Karioi (756 metres). The area is small and densely forested. The tracks in this forest park are ideal for short walks and one to two day hikes.

If you want to spend the night on Mount Pirongia you can stay in the Pukatea Hut, which is about 30 minutes walk from the summit.

Podocarps, such as rimu and totara are found at lower altitudes, along with tawa and tree-ferns. As you go higher, the forest changes. Hardy plants like kamahi and horopito are found on exposed ridges; near the summit, thick mats of mountain flax, hardy coprosmas and ferns are common. Expect to see grey warblers, tui, wood pigeons, bellbirds, fantails and tomtits.

Lifeguards patrol the western end of Raglan's main beach during the summer months. It's safest to swim between the flags, as there can be strong undertows on the outgoing tide. Manu Bay (Waireke) is primarily a surfing beach and famous for its left-hand break. Surfers come from around the globe to compete in the international surfing competition held here every summer.

A day trip to Kawhia Harbour

Kawhia Harbour is a drowned river valley system. Its entrance is obstructed by a sand bar, a feature of most harbours on the western coasts of New Zealand.

A grassy knoll in the grounds of the Maketu Marae is the final resting place of the Tainui waka, the migration canoe that brought the Tainui people to Aotearoa. Two large upright stones mark the stern and prow of the buried canoe. The Māori Queen has a residence at the entrance to the marae.

At Te Puia (Hot Water) Beach, hot springs well up through the sand. Between low and mid-tide you can scoop out a hot pool and enjoy a seaside soak.

To help plan your Waikato holiday choose from the main categories below:

Regional Information
Key information and facts about the Waikato region.

Activity Highlights
Major activities and attractions in the Waikato region.

History
History of the Waikato region.

Choose from our accommodation, attractions, tours, transport or visitor information categories below to find a tourism operator in Waikato.