Discover the history and heritage of the Wanganui region. Visit the Māori pas along the Whanganui River, and learn of their resentment towards European land claims.

After the European settlement in the Wellington region began to grow too much for the land's capacity, the New Zealand Company turned to the Wanganui region, and in 1840 began purchasing the land from the local tribes. 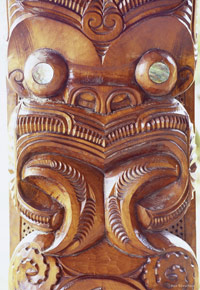 The Wanganui region is the third oldest settlement in New Zealand. Its original discovery is attributed to Kupe, New Zealand's legendary discover. Tamatea, Captain of the Takitimu Canoe, fully explored the region, and soon after, attracted by the Whanganui River, Māori settlers came to the region.

The Whanganui River became an important trade and travel route for settled Māori tribes. They built fishing villages on the banks of the Whanganui tidal estuary and permanent pa sites further up the river.

European involvement did not occur until 1831 when the first Europeans landed at the mouth of the river.

As Wellington grew in size and numbers, the New Zealand Company was forced to start negotiating for land from the resident Māori population. They turned to Wanganui and began purchasing the land from the local tribes. The Māori were angered by the influx of European settlers to the land they still claimed their own. It took about eight years before agreements were finally reached.

The town continued to grow and reached a population of about 2000 by 1860. When the Land Wars of the 1860's began, Wanganui became a major military centre. The local Māori at Putiki Pa remained friendly to the town's inhabitants though.

The Wanganui region is to this day seen as a focal point for any resentment the Māori have over European settlement and land ownership. In 1995 the Wanganui iwi (pre-European Māori residents of Wanganui) occupied the Moutoa Gardens in Wanganui for 79 days as a protest against land claims.

Regional Information
Key information and facts about the Wanganui region.

Activity Highlights
Major activities and attractions in the Wanganui region.

History
History of the Wanganui region.

Choose from our accommodation, attractions, tours, transport or visitor information categories below to find a tourism operator in Wanganui.