The wildest side of New Zealand, discover the West Coast's untamed natural beauty and the history that surrounds it.

The West Coast is a wild and mostly uninhabited region of New Zealand. Retaining the feeling of a 'pioneer frontier', the West Coast has legends and stories from the past that cling to every feature of the landscape. Māori were first to discover the West Coast, seeking sacred pounamu (nephrite jade or greenstone).

Gold fever in the 1860s brought Europeans, many of whom stayed on to start farming, forestry and businesses.

Send a West Coast related E-Postcard to your friends.

The Legend of Greenstone 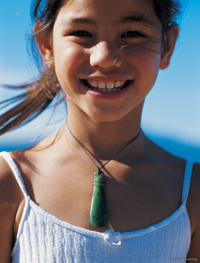 According to Māori oral history, there lived in Hawaiki the chief Ngahue, a daring navigator who was driven from his homeland by a woman, Hine-tu-a-hoanga, who invoked the aid of a great green taniwha (water monster), Poutini, to capture him. The monster hotly pursued the chief's sailing canoe until at last Ngahue saw the stupendous mountain of Aoraki (Mt Cook) beckoning to him and commanding him to sail north.

Arriving at the mouth of the Arahura River (just north of Hokitika), Ngahue watched as the sun hid her face, to cover the land in shadow save only for the gleaming icefields of Tara-o-Tama at the river's source.

With the taniwha close behind, the navigator read the omen as a sign to make his way inland. The water monster pursued him up the river until he reached a deep rock pool at the foot of fearful rapids. There the taniwha was injured, and sank to the bottom to be transformed into greenstone.

The West Coast is New Zealand's only source of greenstone. The boulders are found in the region's rivers. In the towns of Hokitika and Greymouth you can watch greenstone carvers at work.

Abel Tasman was the first European to sight Cape Foulwind on 14 December, 1642. To commemorate this, a mounted astrolabe (early astronomical instrument) and interpretive display are situated on a spur overlooking Tauranga Bay.

Tasman named the promontory Rocky Cape, but it was Captain Cook who later gave it the name Cape Foulwind. Cook's ship the Endeavour was blown well out to sea from this point in a particularly unpleasant patch of weather.

The cape is a New Zealand fur seal breeding colony. From the car park at Tauranga Bay, a very well formed 10-minute track leads to viewing platforms over the seal colony below. Interpretive panels at the platforms provide information on the activity in the colony and the seals' breeding cycle, as well as historical information about the sealing industry that once existed in New Zealand.

South of Haast, the coastline turns westward along a 24 kilometre, gently curving bay to Jackson Head. This headland provides shelter from the prevailing wind direction, and here a fishing harbour has survived since the early pioneer days of seal hunting. Jackson Head also marks the southern end of the west coast's narrow river plains. Beyond this point, the steep mountain ranges plunge directly into the sea - the first of the deep glacial fiords is just 60 kilometres away.

Pre-European Māori tribes prospered in this area, trading valuable greenstone (jade) from the Red Hills and Cascade River valley. Attempts by European settlers to conquer and farm this challenging land proved fruitless; most soon moved further up the coast or over the ranges to Queenstown.

Jackson Bay fishing village offers spectacular views of the ocean and the Southern Alps, which are often painted pink by the setting sun. There are several good walks in the area, ranging from a 15-minute track to Jackson Viewpoint to a two-day hike inland that returns along the coast.

Jackson Bay is one of only two known areas in South Westland regularly used as a nursery area by the rare Hector's dolphin females and their calves.

When you visit this remote and geographically-gifted region, it's easy to see why it has been designated a World Heritage Area. 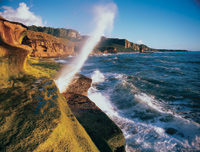 Nature began this work of art about 30 million years ago. Over thousands of years, alternating layers of small marine creatures and sand became buried and compressed on the ocean floor. This created areas with multiple layers of hard limestone and softer sandstone. Earthquake activity then lifted the ocean floor high and dry, and those slow motion artists—the rain and the wind—began to erode the softer sandstone. The outcome is cliffs and ravines with hundreds of horizontal slices along their vertical faces, like huge stacks of pancakes.

In many places, deep inside the cliffs, narrow vertical air shafts created by the rain met with horizontal tunnels created by the pounding ocean. Today, around high tide, the ocean swells rush headlong through ever-narrowing tunnels and force large amounts of water and compressed air to race upward through the vertical shafts. The result is a hissing, heaving, thumping countryside that rhythmically emits geyser-like plumes of salt water. At high tide in a strong westerly swell, this creation of nature is a very impressive sight.

A well-maintained walkway to the pancake rocks leads through native forest before emerging into areas of coastal flax and scrub. The track offers magnificent views of the inland mountains, the rugged coastline and the main attraction—the pancake rocks and blowholes. Informative signage along the way helps you to make sense of what you're seeing.

To help plan your West Coast holiday choose from the main categories below:

Send a West Coast related E-Postcard to your friends.

Choose from our accommodation, attractions, tours, transport or visitor information categories below to find a tourism operator in West Coast.