Dunedin was founded on the picks, harpoons and hard toil of goldminers, whalers and early Scottish settlers over 150 years ago. Much of Dunedin's early wealth and enterprise has left a tangible mark on the city today.

Dunedin's name is the old Gaelic one for Edinburgh—appropriate since the city was established by Scottish Presbyterians.

Dunedin city is renowned for its proximity to incredible wildlife. Visits to see the world's rarest penguins, the world's only mainland breeding colony of the Royal albatross and rare New Zealand sealions are all possible within a short drive of the city centre.

Dunedin is also memorable for its historical architecture. It is regarded to be one of the best preserved Victorian and Edwardian cities in the Southern Hemisphere. Look for the massive stone Flemish Renaissance-style Dunedin Railway Station, the University clock-tower building and the Gothic Revival Dominican Priory. Dunedin even has an authentic castle—Larnach Castle was the grand home of an early politician. You might also want to visit Baldwin Street, the world's steepest residential address.

It's easy to learn about things in Dunedin. Apart from being New Zealand's first university city, it has an abundance of museums, galleries and heritage homes with amazing stories to tell. You can even discover the history of beer brewing at the Speights Brewery.

Dunedin offers all the facilities you would expect within a modern, thriving city, without the traffic jams and parking problems! Daily life is vibrant, positive and upbeat. Cafes, restaurants and bars compete for space with a fabulous mix of shops and entertainment venues. 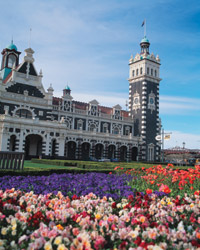 To help plan your Dunedin holiday choose from the main categories below:

Regional Information
Key information and facts about the Dunedin region.

Activity Highlights
Major activities and attractions in the Dunedin region.

History
History of the Dunedin region.

Choose from our accommodation, attractions, tours, transport or visitor information categories below to find a tourism operator in Dunedin.