No matter the season, the Ruapehu region is brimming with stunning scenery, places to go, and things to see. Come in summer or winter, Ruapehu is stunning all year round. 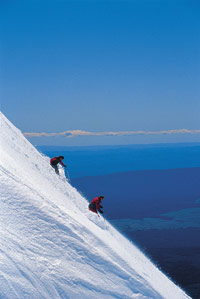 Nearly all the scenery in the Ruapehu region stems from the massive three-pack of volcanoes that dominates the landscape. The volcanoes are responsible for the deserts, the lakes, the rivers and the thermal springs.

Come in summer and appreciate the beauty of the region's rivers, particularly the Whanganui, Ongarue and Whakapapa. Whether you find yourself on the end of a fly fishing rod or attached to a paddle, the riverbank views are many and varied. The experience is sure to be peaceful and relaxing.

In winter the Ruapehu region is all about snow, and the fun you can have with it. The mountains wear a heavy cloak of white, which means that Turoa and Whakapapa ski fields are buzzing with activity.

The historic Grand Chateau is at its most beautiful, offset against a snowy carpet. A scenic flight over the steaming crater of Mount Ruapehu promises to be an awesome experience. Icy roads in many parts of the district require extreme caution when driving.

The Tongariro World Heritage National Park isn't special just because it showcases three magnificent volcanoes. It's also highly treasured because it was New Zealand's first National Park, and the first park in the world to be created by a gift of land by an indigenous people.

In 1887 Te Heuheu Tukino IV (Horonuku), Paramount Chief of the Ngati Tuwharetoa people, gifted 2,630 hectares of the central volcano area to the New Zealand Government, including the summits of Tongariro, Ngauruhoe and Ruapehu. His move secured the mountains for all people, for all time.

Over the last century, adjoining land has been added to the park—its present size is nearly 80,000 hectares. The park's centrepiece, Mount Ruapehu (2,797 metres), rises dramatically from the surrounding alpine tussock and volcanic rock plateau. Alongside Mount Ruapehu are the two smaller volcanic mountains of Mount Ngauruhoe (also active) and Mount Tongariro. The picture perfect snow covered cone of Mount Tongariro provides the perfect place to gaze across the North Island towards Mt Taranaki in the west and the native forest clad Kaimanawa ranges in the east. Mount Ruapehu is the site of the North Island's premier ski fields—Whakapapa and Turoa. Chairlifts run in summer as well as winter, making it easy to get up to the huge views.

The Tongariro Crossing is renowned as a one-day hike that does it all, from alpine meadow to mountain summit with stunning volcanic features along the way. It takes you across a lunar landscape of craters, scattered pumice, coloured lakes, piles of scoria and statue-like mounds of volcanic rock—all testament to the forces that were unleashed to create this volcanic desert.

To get to the beginning it's easiest to use the track transport, which leaves from the Whakapapa Information Centre—the small charge covers drop off and pick up.

Around the Mountain or up to the Crater

As well as the Tongariro Crossing, there are a number of other scenic hiking trails around the National Park. Following mountain contours or meandering streams, these trails can last as long as you have time, from a one hour jaunt to a five day wilderness experience.

The Round-the-Mountain track offers amazing scenery that changes with the hour. It takes three full days for a fit party in good weather conditions (nights at Mangaturuturu and Rangipo Huts), four to six days at a more leisurely pace.

The best way to experience the Ruapehu Crater walk is to join a guided tour, which leaves from the Whakapapa ski-fields. From the 'Top o' the Bruce' you can use chair lifts to give you a head start. Then there's a one hour hike to the Dome Shelter for incredible views of the crater. 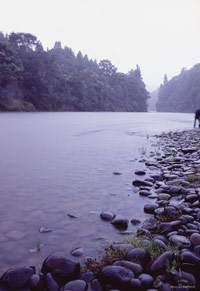 The Whanganui River starts out as an alpine stream, high up on Mount Tongariro, and gathers water as it travels north to the town of Taumarunui, meeting the Ongarue River at Ngahuinga ('the meeting place'). The river then flows southwest for over 160 kilometres to the Tasman Sea.

Whanganui River is New Zealand's longest navigable waterway, and a perfect environment for kayaking or canoeing. Even absolute beginners can manage the Whanganui's gentle rapids, however the remoteness of the middle stretches makes it essential to take proper equipment and sufficient supplies.

Until recent times, the Whanganui River was the main route into the North Island interior. It has a fascinating and exciting history of wars, steamboats, water-driven flour mills and abandoned homes and farms.

The Unreal Bridge to Nowhere

The Bridge to Nowhere is a concrete road bridge spanning the Mangapurua Stream in Whanganui National Park.

The bridge was built across the Mangapurua Gorge to provide access to an area where pioneering farmers (mainly soldiers who had returned from World War 1) were trying to scratch a living. The intention was to eventually build a road to the settlement, but the area proved to be so remote and unsuitable for farming that the settlers left and the farms reverted to native bush.

All that remains today is the bridge, which is accessible by boat and then by walking track.

To help plan your Ruapehu holiday choose from the main categories below:

Regional Information
Key information and facts about the Ruapehu region.

Activity Highlights
Major activities and attractions in the Ruapehu region.

History
History of the Ruapehu region.

Choose from our accommodation, attractions, tours, transport or visitor information categories below to find a tourism operator in Ruapehu.