Centuries of glacial action crafted Lake Wanaka and Lake Hawea. Discover their scenic perfection yourself, up close and personal.

Wanaka's fortune has changed over the years. The discovery of gold in the 1870s inspired a rush of interest in the area. As the gold faded away, high country farming became the main source of employment. Today, tourism is the new gold—an endeavour that requires the environment to stay picture perfect.

Send a Wanaka related E-Postcard to your friends.

The Māori name for the trail that leads through Haast Pass is Tiora-patea, which means 'the way is clear'. The pass was first used by Māori on their way to the pounamu (jade) rivers of the coast.

The road over Haast Pass is only 160 kilometres long, but it took over 30 years to carve out of solid rock. It runs past lakes Wanaka and Hawea, through golden tussock-covered hills, then winds over the great divide of the Southern Alps to the rainforests, waterfalls and rivers of the west coast. The contrast between the east and west landscapes is extreme.

A gold prospector called Charles Cameron is believed to be the first European to find the pass. He crossed over in January 1863, burying his powder flask to the west of the pass. Close behind him came Julius von Haast, who named the pass after himself and claimed to be the first European to have travelled through it, however the discovery of Cameron's flask discredited this claim. It took Julius von Haast and his party over four weeks to complete the journey, after being shown the start of the trail by Māori. 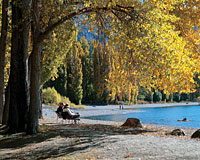 Excavated by massive glaciers more than 10,000 years ago, Lakes Wanaka and Hawea lie side by side. At a sliver of land known as The Neck, which is just 1,000 metres wide, the glaciers were once joined.

Ringed by pebbly beaches and with magnificent views to the surrounding peaks, both lakes offer a variety of adventures, especially during the long, hot months of summer.

The Clutha River carries the largest volume of water of any river in New Zealand and has been dammed in a number of places for electricity generation. During the late 1800s, the river yielded a vast quantity of gold. At one point in time, there were 187 gold dredges working the river.

To help plan your Wanaka holiday choose from the main categories below:

Send a Wanaka related E-Postcard to your friends.

Regional Information
Key information and facts about the Wanaka region.

Activity Highlights
Major activities and attractions in the Wanaka region.

History
History of the Wanaka region.

Choose from our accommodation, attractions, tours, transport or visitor information categories below to find a tourism operator in Wanaka.