Taranaki enjoys a well remembered history, stored through time by historic sites scattered throughout the region. Explore the historical Māori villages, Cape Egmont Lighthouse, or wade out to the wrecked SS Gairloch which is slowly crumbling into the sand near Oakura on Taranaki's coast.

Historic sites related to early Māori settlement and the Taranaki Land Wars, fought between 1859 and 1881, are scattered throughout the region. In the town of Manaia, a walkway takes you through the golf course and past the historic redoubt, which features blockhouses built in 1880 by the Armed Constabulary. 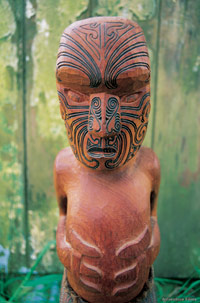 At Manukorihi Pa in Waitara stands a memorial to Sir Maui Pomare (1876 - 1930), a Māori leader who did much to restore the fortunes of his people after the land wars. Pomare is likened to the legendary Maui, because he 'fished' compensation for the land from a sea of sorrow.

The small settlement of Parihaka, nestled quietly in the rural countryside, is a site of immense historical and cultural importance. In the 1870s it was the largest Māori village in the region—the home to Te Whiti and Tohu, who actively encouraged Māori to passively protest the confiscation of their land and resist colonisation. In 1881, Parihaka the scene of one of the most lamentable infringements of civil rights ever witnessed in New Zealand. Te Whiti and Tohu were arrested and Parihaka was sacked by government troops. The people of Parihaka were the first in the world to practice passive resistance.

Pukearuhu, seven kilometres north of Urenui, is one of the great pa of Ngati Tama. Dramatically located above the coastal cliffs, the pa site is under the care of the Department of Conservation.

Koru pa, near Oakura, is memorable for its stone works, clear terracing, ancient paths and deep ditches. The pa was the centre of power for the Nga Mahanga a Tairi hapu of the Taranaki tribe.

Six kilometres north of Tongaporutu on State Highway 3, it's possible to see the remains of the most spectacular of all Taranaki pa—Te Kawau. This stronghold occupied the flat top of an islet, and was accessible only at low tide. These days the site is a burial ground—visitors shouldn't attempt to access the pa.

By day, the Cape Egmont Lighthouse visibly marks the western-most point of the Taranaki coast. By night, it flashes white light once every eight seconds, telling ships up to 22 nautical miles away exactly where they are. 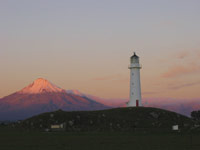 The lighthouse was built in London in the mid 1800s. In 1865, the cast-iron segments were shipped to New Zealand and assembled on Mana Island, north of Wellington. However, this spot proved unsatisfactory. Several shipping accidents later, it was thought that the Mana light was being confused with the lighthouse at Wellington Heads.

In 1881, the tower was dismantled and carried in sections to Cape Egmont. The huge, cast iron sections would have been ferried ashore by surfboats, then dragged up to the site by bullock teams.

Just a few miles away was the settlement of Parihaka, which at the time was the centre of a Māori non-violent movement led by Te Whiti O Rongomai and Tohu Kakahi.

Using passive, but effective, resistance the people of Parihaka managed to delay the erection of the lighthouse. In reply, the colonial authorities stationed about 40 members of the Armed Constabulary at the tower to ensure its completion. The light finally shone on 1 August 1881.

To find the lighthouse, which was automated in 1986, follow State Highway 45 to Pungarehu. Just south of town, turn right on Cape Road. Drive five kilometres to the lighthouse which is at the end of the road.

Wreck of the Gairloch

The bow of the SS Gairloch is slowly crumbling into the sand near Oakura on Taranaki's coast. This rusted iron skeleton has been a local landmark for more than 100 years.

On the night of January 5th 1903—dark and moonless by all reports—the Gairloch had just narrowly missed colliding with her sister ship, the Ngapuhi, when she ran aground on Timaru Reef. The captain and crew rowed to the New Plymouth breakwater and were housed for the night at the Breakwater Hotel.

The next day, a harbour board dredge helped to salvage personal effects from the Gairloch—particularly silverware, linen, upholstery and spirits. The harbour-master assessed the wreck, which was extensively holed, as unsalvageable.

Storms, time and tides, and the occasional souvenir hunter, are gradually claiming what's left of the Gairloch. A short wade out to sea you'll find the bottom plates and remnants of the ship's engines—now home to various kinds of sea life.

Regional Information
Key information and facts about the Taranaki region.

Activity Highlights
Major activities and attractions in the Taranaki region.

History
History of the Taranaki region.

Choose from our accommodation, attractions, tours, transport or visitor information categories below to find a tourism operator in Taranaki.