From the wild black sand beaches on the road to New Plymouth to the dramatic, snow-capped, volcanic Mount Taranaki, you will be left in awe of the Taranaki region.

The Taranaki region has three distinct landscapes—the mountain and its associated forest, the surf-fringed coast and the tranquil rural pastureland in between.

Take the time to explore each of these awe-inspiring landscapes, you won't be disappointed! 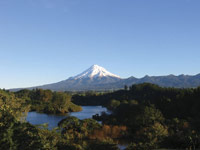 In a country where mountains loiter in clumps, Mount Taranaki (Egmont) stands alone—like someone has pinched the fertile plains between thumb and forefinger to create a near perfect 2,518 metre high cone. For local Māori, arriving 120 millennia after the mountain's eruptive birth, it remains sacred.

Visitors to Taranaki's biggest playground need to remember that, despite its tranquil appearance, it is still a wild place. Don't be tempted to wander off on a hot summer day in just a pair of shorts and T-shirt, because this mountain area can get dangerously cold quickly.

If people don't go skiing in winter at the field on the Stratford side, they tend to go walking in summer. You can choose anything from an easy 15-minute jaunt to a four day trek on the Around the Mountain track (the original cut in 1880).

To throw in another challenge, walking from Taranaki's coast to the mountain's summit is, botanically speaking, the equivalent of walking from the Kermadec Islands, 1000 kilometres northeast of Auckland, to Scott Base in Antarctica.

The summit is climbed dozens of times every year and a local mountaineering club holds an annual open-day summit climb. From Dawson Falls (850 metres above sea level), there's a maze of walks on offer, but perhaps the most popular is to Wilkies Pools, a series of eroded rock pools connected with gentle waterfalls. East Egmont offers the mountain ski field as well as the short Kamahi walk through the Goblin Forest, with branches bearded in grey-green moss. Lucy's Gully offers a fabulous picnic area among gigantic redwoods and access into the Kaitake Range.

State Highway 43 Heritage Trail is one of New Zealand's most secluded roads. Pick up a heritage trail brochure for the journey and fill up the gas tank, as there's no fuel over its 150 kilometre length.

The highway has not always been the mostly sealed road it is today. When this area was settled in the late 19th century, horses were the only mode of transport capable of crossing this steep and muddy terrain.

Driving over the four steep hills today, you begin to understand why it took a packhorse four days to reach Whangamomona, the midway point. First settled in 1895, with no road or rail access, the great flood of 1924 sealed the village's fate and today there's just the pub and about 25 hardy locals. The one-way 180-metre-long Moki tunnel is on the western end of the Tangarakau Gorge.

State Highway 43 Heritage Trail provides an exciting alternative if you are driving south from Auckland to Taranaki region or to Wellington, or Wellington to Auckland, or as a day trip from Stratford.

Catching a Wave on the Surf Highway

Because Taranaki's spherical coast collects 180 degrees of all possible swells, it offers New Zealand's most consistent surf. For this reason, the 105 kilometre long Highway 45 that hugs this coast is also known as the Surf Highway. But the Surf Highway isn't just surf. Nowhere does the Egmont National Park come closer to a main road than it does at Lucy's Gully, giving access to walks over the Kaitake Range and to the park's 300-kilometre track network.

You'll catch a glimmer of Taranaki's NZ$2 billion energy industry at the Maui Production Station Visitor Centre at Oaonui. You'll see more than a glimmer from the Maui offshore rig burning gas at night. Just up the road is the Egmont Lighthouse (turn off at Cape Road), protecting shipping here since 1881 and often photographed with Mount Taranaki in the background.

Pukekura Park and the Bowl of Brooklands

In the centre of New Plymouth is Pukekura Park—a botanical wonder that was first opened in 1876, changing the area from a swamp into a public recreation ground. Over the intervening years it has developed into about 52 hectares of lush native bush and groomed gardens within a city that has grown around it. The park contains two lakes—one of which has wooden rowboats for hire—a children's playground, cricket ground, fernery and display houses, kiosk, fountain and waterfall, historic band rotunda and the Bowl of Brooklands.

National and international acts regularly perform at the Bowl, a natural amphitheatre. Its night-time concerts cannot be missed for the unique and memorable experiences the Bowl provides both audiences and performers. Right next to the Bowl are beautiful English-style gardens and a children's zoo.

Pukekura Park is the venue for the spectacular Festival of Lights. From December to February every year, hundreds of lighting displays turn the park into a huge illuminated fantasyland.

Regional Information
Key information and facts about the Taranaki region.

Activity Highlights
Major activities and attractions in the Taranaki region.

History
History of the Taranaki region.

Choose from our accommodation, attractions, tours, transport or visitor information categories below to find a tourism operator in Taranaki.